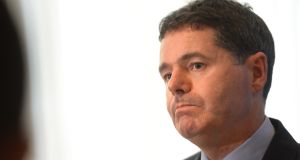 The Church of Ireland has emerged as a shareholder in the holding company behind Nama, in a deal that allowed a UK hedge fund to lock in some gains following its purchase of a stake in the agency at the height of the financial crisis.

Minister for Finance Paschal Donohoe disclosed in response to a parliamentary question from Fianna Fáil TD Seán Fleming this week that the Church of Ireland Clergy Pensions Fund and the Representative Church Body hold a combined 5.75 per cent stake in the holding company of Nama.

The funds bought the holdings from a UK hedge fund, called Walbrook Capital, which acquired a 17 per cent stake in the holding company, National Asset Management Agency Investment Limited (NAMAIL), in 2012 at a deep discount to its nominal value of €17 million.

Efforts by The Irish Times to get comment from spokesmen for the Church of Ireland on Wednesday were unsuccessful.

Nama was set up in 2009 with NAMAIL as its holding company, under a construct designed to keep the bad bank off the State’s balance sheet at a time when Government debt was ballooning and there were concerns that the agency would end up making a large loss over its lifetime.

NAMAIL was established with €100 million of capital, with a 51 per cent stake sold to private investors, Irish Life Assurance, Bank of Ireland’s New Ireland Assurance unit and Percy Nominees, then a nominee account of AIB Investment Managers but now owned by stockbrokers Davy. The remaining 49 per cent of the shares were held onto by the State.

The shareholder agreement entitled the private investors to a dividend based on the Government’s borrowing costs, but left Nama with controlling voting rights and almost all the upside from the agency’s financial performance.

The State’s takeover of Irish Life during the financial crisis in 2011 threatened to bring majority ownership of NAMAIL into the hands of the State, given the Government already owned 49 per cent of the Nama special purpose vehicle.

However, the sale of Irish Life’s NAMAIL stake to Walbrook, which was founded in 2011 by three former Barclays executives, Michael Keeley, Geoff Broomhead and Simon Haworth, averted a situation where Nama would be added to the State’s balance sheet.

It is understood that the Walbrook trade five years’ ago was at a deeply discounted price of less than €8 million – less than half the holding’s nominal value.

Market sources said that the stake is now worth marginally more than the €17 million nominal value. That’s because the private investors are entitled to their original investment, plus as much 10 per cent of their capital when Nama is finally wound down.

It is likely that the Church of Ireland funds acquired their shares at close to their current market value.

Mr Donohoe said in his response to Mr Fleming’s parliamentary question that the private investors in NAMAIL had received €13.5 million of dividend to date. The special purpose vehicle is scheduled to be wound down at the end of the decade, after all of Nama’s debt is repaid.

The three executives behind Walbrook continue to hold a combined 11.25 per cent stake in NAMAIL. Walbrook’s name was changed earlier this year to AMKGIBSSH Capital, according to filings with the UK Companies House.