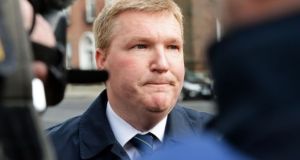 Fianna Fáil’s finance spokesman Michael McGrath McGrath said a “half-baked system” now existed, whereby the servicing agent for the loan is regulated but the same requirement is not placed on the owner of the borrowings. Photograph: Eric Luke

The Central Bank of Ireland wanted the Government to regulate the investment groups that were acquiring billions of euros of commercial loans and mortgages from the banks and Nama, rather than the companies later hired to administer the portfolios by these so-called vulture funds.

This has emerged in correspondence between Bernard Sheridan, director of consumer protection at the Central Bank, and Fianna Fáil’s finance spokesman Michael McGrath.

In a letter dated August 16th, Mr Sheridan said: “The Central Bank consistently advocated for some time prior to the enactment of the Consumer Protection (Regulation of Credit Servicing Firms) Act 2015 to have the gap in regulation for loan transferees closed in order to safeguard borrower protections. Our preferred policy approach was for the regulation of the actual loan owners.”

Instead, following a public consultation process, the Government chose to regulate credit servicing firms, which typically manage the loans on an outsourced basis for the new owners. These borrowing are either mortgages or SME loans.

“Following enactment, the Central Bank has focused on implementing a robust regulatory regime for the new category of regulated firm, as provided for under the act,” Mr Sheridan said.

He noted that while the fact that credit servicing firms now fall within the consumer protection framework had increased protection for borrowers, it was “too early” to determine the “overall effectiveness” of the legislation.

Mr McGrath said a “half-baked system” now existed, whereby the servicing agent for the loan is regulated but the same requirement is not placed on the owner of the borrowings.

“The legislation that was passed last year was entirely inadequate as it focused on those who are servicing debts on behalf of vulture funds... who outsource the administration of loans [but] still control key decisions such as initiating action for repossession, foreclosing on a going concern business or raising the interest rate that applies to the loan without actually being subject to regulation.”

Mr McGrath said there was a “dangerous gap” in the legislation. “There is also very legitimate concern that loans may be sold more than once with each subsequent transaction resulting in a deterioration of the conditions of the borrower in respect of the interest rate, penalty charges and the status of any restructuring arrangement.”

The Department of Finance last night said the act “ensures that relevant borrowers, whose loans are sold to third parties, maintain the same regulatory protections they had prior to the sale”.