Up to 49 witnesses expected in long-running dispute about loans for €2.34bn 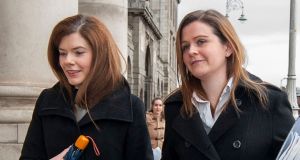 Colette and Brenda Quinn, daughters of Sean Quinn, are part of a dispute between Mr Quinns’ five children and the IBRC, concerning loans of €2.34bn

The hearing of the long-running dispute between Sean Quinn’s five children and Irish Bank Resolution Corporation (IBRC) concerning loans of €2.34 billion will open before the High Court on Tuesday.

Mr Justice Garrett Simons will first hear an opening statement, expected to last three and a half days, by Bernard Dunleavy SC, on behalf of Aoife, Brenda, Ciara, Colette and Sean Quinn Junior.

That will be followed by an opening statement, listed for one and a half days, on behalf of IBRC, and a half-day statement on behalf of receivers appointed over various Quinn assets.

Up to 49 witnesses, including David Drumm, the former CEO of Anglo Irish Bank, IBRC’s predecessor in title, will then give evidence during proceedings which could run for six months.

Mr Drumm, who is serving a six-year jail sentence for his role in a €7.2 billion fraud perpetrated at the peak of the banking crisis in 2008, is among several witnesses subpoenaed by the Quinns to give evidence.

In their action, initiated in 2011, the Quinns dispute any liability for share pledges and guarantees related to loans of some €2.34 billion advanced by Anglo Irish Bank to Quinn companies.

A separate case by IBRC against various Quinn family members and other parties, alleging a conspiracy to strip some €455 million assets from companies of the Quinns international property group is due for hearing after the children’s action.

Both cases were put on hold for several years pending the hearing of criminal proceedings against various Anglo executives and officials.

The core issue in the children’s case concerns the validity of share pledges and guarantees given to Anglo as security for monies loaned to Quinn companies.

The transactions arose out of a fall in the price of Anglo shares in 2007 when the bank advanced to Quinn Group firms certain funds to allow them to meet certain share commitments.

Those “contracts for difference” (CFDs) involved an agreement to exchange the difference between the current and future price of shares in Anglo.

The Quinns signed various security documents relating to the CFDs and claim they did so without legal or financial advice.

When Anglo’s share price continued to drop in 2008, the bank demanded the Quinns reduce the CFD position and most of the CFDs were unwound into shares.

One portion of those was purchased by a group of investors known as the “Maple Ten” and the rest by the Quinn Group. The Quinn shares were transferred to six Quinn-owned Cypriot companies which ultimately received €498m from Anglo.

In their original statement of claim, the Quinns alleged the guarantees and pledges were unenforceable on grounds including they were procured by unlawful lending in breach of company law and EU market abuse regulations.

The Supreme Court ruled in March 2015 they could not pursue the unenforceable lending claims and those issues are no longer in the case.

The core claim now is the various securities provided by the children are invalid on grounds including undue influence, “unconscionable bargain”, negligence and breach of duty by the bank to the children, especially to advise them. It is also claimed the bank’s conduct involved intentional infliction of economic harm on them.