Bank has set aside €265m to cover tracker refunds, compensation and other costs 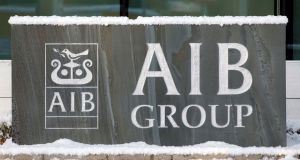 Both AIB and its EBS subsidiary are among six lenders that are in the middle of Central Bank enforcement investigations that will lead to likely fines. Photograph: Cathal McNaughton/Reuters

AIB has warned that it faces additional costs this year related to the industry-wide tracker mortgage scandal, as the bank posted an otherwise positive trading update.

The lender, led since early last month by chief executive Colin Hunt, said that the additional costs will come as the tracker mortgage examination reaches its final stages.

AIB has set aside €265 million of provisions to date to cover refunds, compensation and other costs related to the issue. Both AIB and its EBS subsidiary are among six lenders that are in the middle of Central Bank enforcement investigations that will lead to likely fines.

Mr Hunt said in the trading statement that AIB had a “good start to 2019 with solid profitability, strong new lending and continued performing loan growth.”

The bank sold a €1 billion portfolio of mainly investment loans to a consortium led by US distressed debt group Cerberus last month, lowering its non-performing loans to 7.6 per cent of its total portfolio from 9.6 per cent in December.

AIB is known to be planning a further asset sale this year to help cut the ratio to about 5 per cent.

New lending rose by 11 per cent in the first quarter on the same period last year, with the bank’s performing loan book increasing to €57.6 million from €56.8 million. However, gross loans fell by €500 million to €62.4 million, mainly driven by the loan sale.

The bank’s net interest margin – the difference between the average rate at which it funds itself and lends on to customers – edged up to 2.5 per cent in the first quarter from 2.48 per cent for the previous three months.

“We have had a good start to the year and remain on track to meet expectations,” the bank said, adding that the economic backdrop “is favourable”.

Goodbody Stockbrokers analyst Eamonn Hughes, who estimates that AIB will post €1.132 billion in pretax profits this year, said that the bank’s net interest margin in the first quarter was “slightly better” than he had been expecting.

AIB’s common equity Tier 1 capital (CET1) ratio, an important gauge of a bank’s financial strength and ability to withstand shock losses, dipped to 17.3 per cent from 17.5 per cent at the end of March.

Contributions to the ratio from profits during the period were offset by the impact of a new international accounting standard – known as IFRS 16 – that forces companies to account for property and other leases on their books.

The bank has target of having CET1 of more than 13 per cent of risk-weighted assets.

AIB said that its operating costs rose marginally during the first quarter as a result of rising staff salaries and continued investment in loan restructuring. Most of the bank’s 10,000 employees will enjoy a 3 per cent pay rise this year as a result of deal between the group and the Financial Services Union (FSU) and brokered at the Workplace Relations Commission in January.