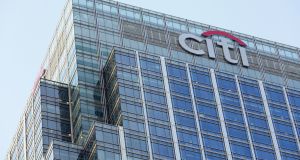 Citigroup’s Dublin-based European banking unit, which handed $1.66 billon (€1.5 billion) of excess money on its balance sheet to its parent by way of dividends in the past two years, has said it does not plan to make such a payment this year on its 2018 results, even as its profits rose.

Fillings with the Companies Registration Office show that Citibank Europe’s profit after tax rose to $879 million last year from $600 million in 2017, helped by a “strong performance” in its treasury and trade solutions (TTS) business as well as its securities services division.

Earnings were also boosted as the company’s bad loan losses slumped to $9.9 million from $168 million.

The lender’s assets grew to $60.6 billion from $49.6 billion a year earlier, mainly as a result of its establishment of a German branch that took over existing Citigroup assets that were based in the country.

Citibank Europe’s assets effectively doubled in size to about $50 billion and its employees ballooned to 9,000 at the start of 2016 when the group’s United Kingdom-based Citibank International unit was folded into the Dublin operation.

The merger was part of a drive by Citigroup’s global chief executive Michael Corbat, in position since late 2012, to simplify the group’s unwieldy structure and the cost of its number of legal entities, in order to reduce risk after its $45 billion US taxpayer bailout during the financial crisis.

Completed almost six months before UK voters decided to quit the European Union, it left the group well placed as rivals scrambled to find ways to maintain access to the single market.

The $1.66 billion of dividends were paid over in the two years following the merger transaction.

Citibank Europe is led by Czech-born chief executive Zdenek Turek, with Limerick native Cecilia Ronan serving as chief administration officer and chief country officer for the Republic, where it employs about 2,500 people.

“The company is closely monitoring the potential impacts of the United Kingdom’s proposed exit from the European Union,” the report said. “As part of the company’s overall Brexit strategy, the board has initiated a process to transfer the company’s UK branch retail business to a separate legal entity in the UK in 2019.”

1 Why are markets booming when a crash is on the way?
2 Could your old car be giving away all your secrets to its new owner?
3 Permission sought for €150m film and media campus in Wicklow
4 Dunnes Stores trials online ordering from Cornelscourt outlet
5 AIB U-turn on mortgage block for those on Covid wage subsidy
6 Staff at Bewley’s cafe on Grafton Street are made redundant
7 Vodafone to speed up 5G rollout using new technology
8 Covid-19: Publicans and restaurateurs row over calls for VAT cuts
9 Ryanair passenger traffic slumps 97% as shutdown restricts travel
10 Government committed to finalising roadmap for safe overseas travel ‘shortly’
Real news has value SUBSCRIBE