Banks say there were too many hurdles to justify pursuing deal 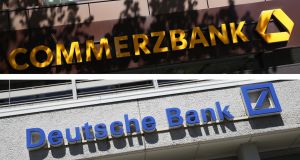 Germany’s two biggest listed lenders said there were too many hurdles to justify pursuing a complex deal that would have formed the euro zone’s second-largest lender with €1.8 trillion in assets and 140,000 employees.

Deutsche Bank and Commerzbank have abandoned their merger talks, bowing to shareholder concerns and employee resistance in a move that could open the door for foreign rivals to acquire the smaller of the Frankfurt-based rivals.

Germany’s two biggest listed lenders said there were too many hurdles to justify pursuing a complex deal that would have formed the euro zone’s second-largest lender with €1.8 trillion in assets and 140,000 employees.

The decision leaves the duo seeking strategic alternatives to cut costs and stem revenue losses, while grappling with historically low interest rates, fierce domestic competition and high funding costs. Shares in Deutsche Bank were down 1.5 per cent, while Commerzbank shares fell 2.4 per cent.

Deutsche Bank said a “a combination with Commerzbank would not have created sufficient benefits to offset the additional execution risks, restructuring costs and capital requirements associated with such a large-scale integration”.

It added that it “will continue to review all alternatives to improve long-term profitability and shareholder returns”.

The idea of a merger had been backed by the German government. Once the six weeks of talks were abandoned on Thursday, politicians rounded on finance minister Olaf Scholz, who has repeatedly called for the creation of a Germany-based European banking champion.

Mr Scholz said in a statement that German industrial companies needed competitive banks “that can accompany them all over the world,” while adding that a merger would “only make sense if they pay off from a business point of view and lead to a durable business model”.

However, Hans Michelbach, a conservative MP from Angela Merkel’s CDU/CSU group, welcomed the breakdown of talks, saying they had been “politically driven” by Mr Scholz and his deputy, the former Goldman Sachs banker Jörg Kukies.

“Economic common sense has triumphed over the flowery political dreams of creating national champions,” said Mr Michelbach, adding that the end of the talks should help Germany to steer away from the “false path” of state planning. “Size doesn’t necessaril

y mean strength, and the state is not the best entrepreneur,” he said.

Deutsche Bank also pre-released some first-quarter results, which were mostly ahead of analysts expectations. It said pre-tax profits were about €290 million, falling a third year-on-year, and net profits fell two-thirds to about €200 million.

Group revenues fell 8 per cent to €6.4 billion, while net revenue at its corporate and investment bank was down 14 per cent at €3.3 billion. Adjusted costs fell 7 per cent to about €5.9 billion.

Alexandra Annecke, portfolio manager at Union Investment, which has stakes in both banks, said: “The problems of a merger have recently become more and more obvious, so the failure is not surprising.”

She said “Deutsche Bank now needs a plan on how to sustainably increase profitability, especially with regard to the investment bank,” while warning that its target for a return on tangible equity (ROTE) of more than 4 per cent this year was “becoming more and more remote”.

Analysts on average expect Deutsche Bank’s ROTE to only rise from 0.4 per cent last year to 1.5 per cent this year, but a person familiar with the bank’s internal discussions said it stood by its 4 per cent target.

Other European lenders have circled Commerzbank, which has €462 billion in assets, 49,000 employees and 1,000 branches in Germany. Italian rival UniCredit, which owns Munich-based lender HypoVereinsbank, stands ready to bid for Commerzbank.

Dutch lender ING signalled to Commerzbank and the German government, which has a 15 per cent stake in the lender, that it might be willing to relocate its headquarters from Amsterdam to Frankfurt as part of a merger with Commerzbank.

Commerzbank chief executive Martin Zielke has been highly reluctant to do a cross-border tie-up and has pushed for domestic consolidation for months.

UBS chief executive Sergio Ermotti said the ending of talks between the German banks was “just the delay of the inevitable outcome” of European banking consolidation.

The asset management arms of Deutsche Bank and UBS are already in talks about a potential merger to create a dominant European group in the investment industry with just over €1.4 trillion under management.

German policymakers are reluctant to countenance that Commerzbank – one of the most important lenders to the country’s small and medium-sized enterprises – would be gobbled up by a foreign bank. A central concern is that a non-German lender would withdraw to its home market in a future financial crisis.

However, the talks were hampered by the prospect of having to convince shareholders to put in up to €10 billion of fresh capital into an enlarged Deutsche Bank, its unfinished integration of an earlier acquisition of Postbank and dogged employee resistance. Many analysts were also sceptical about a deal.

Both lenders’ chairmen and US private equity fund Cerberus, which is one of the largest shareholders in both banks, had backed the deal. But Deutsche Bank’s other large investors had been much less enthusiastic.

Paul Achleitner, Deutsche Bank chairman, said: “The intensive discussions and analysis over the past few weeks have shown us that the potential risk-reward trade-off is not attractive for our investors.”

Ingo Speich, head of sustainability and corporate governance at Deka Investment, the German asset manager, said: “A merger had been an enormously complex and protracted endeavour. Rationality prevailed after all.” – Copyright The Financial Times Limited 2019