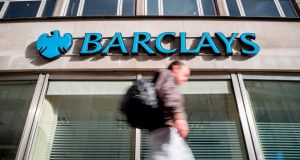 The performance of Barclays’ investment bank was overshadowed by a £1.4 billion charge taken to cover the cost of compensating UK consumers who were mis-sold payment protection insurance. Photograph: AFP

Barclays bolstered its case for preserving its investment bank with a strong set of quarterly results that put pressure on Edward Bramson, the activist investor who has called for the lender to pull back from trading.

Pretax profits at the corporate and investment bank jumped to £882 million in the third quarter, an increase of 77 per cent compared with the same period last year, after the UK-based lender posted strong gains in trading revenue and banking fees.

The solid performance appeared to validate the strategy adopted by Jes Staley, chief executive since late 2015, who has maintained the group’s presence in global investment banking even as other European banks have staged a retreat.

Earlier this year, Deutsche Bank said it would exit equities trading as part of a radical overhaul of its investment bank, while HSBC, which has embarked on a cost-cutting drive, is also expected to pull back.

“We like the diversified strategy we have and hopefully the stock price will start to reflect that we are right,” Mr Staley said in an interview.

Shares of Barclays, which have risen 14 per cent this month, increased by 1.8 per cent in early trading in London on Friday, taking the price to 169.36p.

Fees generated from advising corporations on mergers and acquisitions and by underwriting debt and equity raisings jumped by a third compared with the same period last year. Mr Staley attributed the increase in part to its role advising the London Stock Exchange on its defence against an unsolicited bid from the Hong Kong Stock Exchange.

He also cited the bank’s role as an underwriter on the initial public offerings of the ride-sharing group Uber and social network Pinterest.

However, the performance of Barclays’ investment bank was overshadowed by a £1.4 billion charge taken to cover the cost of compensating UK consumers who were mis-sold payment protection insurance. – Copyright The Financial Times Limited 2019