Tracker scandal: some banks only co-operated on threat of court action 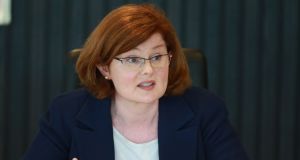 Officials at the Central Bank had to threaten to take some lenders to court in order to get them to co-operate properly with its examination into the tracker mortgage scandal, which has resulted in €693 million of refunds and compensation for affected customers.

Sean Cunningham, director of the regulator’s enforcement and anti-money laundering unit, confirmed it needed to resort to threats of High Court action in some cases, when asked about this matter by Fianna Fáil TD Michael McGrath at an Oireachtas finance committee hearing on Thursday.

The committee heard that the number of affected customers – going back more than a decade – has also crept up by 400 cases to 40,500 since the Central Bank published a final report on the matter in July.

Some 20,000 of the cases included in the compensation programmes were as a result of the Central Bank challenging lenders about the scale of their responsibilities, according to Derville Rowland, director general of financial conduct at the organisation.

“Banks have now paid 98 per cent of those affected,” Ms Rowland said.

However, Gráinne McEvoy, director of consumer protection, said that banks will be expected to review how they handled various groups of customers if the Financial Services and Pensions Ombudsman (FSPO) finds against them as it investigates individual complaints. This may result in the industry’s tracker refunds and compensation costs rising further.

Banks have ringfenced more than €1.1 billion to deal with the tracker problem since the regulator ordered them in late 2015 to go back over their loan books to find customers who had been either wrongly denied their right to a cheap loan that tracks the European Central Bank’s (ECB) main interest rate, or put on the wrong rate entirely.

John McGuinness, chairman of the Oireachtas finance committee, predicted that banks’ clean-up bill for the tracker fiasco “may grow substantially over time” when the FSPO completes its work on the matter.

The new Irish Banking Culture Board (IBCB), set up earlier this year to improve standards across the industry, had to get involved over the summer when it emerged that lenders were contesting the FSPO’s attempts to investigate tracker case complaints, claiming they fell outside a legal six-year time limit. The IBCB’s five member banks committed in late August to waive this time limit.

In May, Permanent TSB became the first bank to be sanctioned for its role in the tracker issue, when the Central Bank ordered it to pay a fine of €21 million.