PTSB chief Jeremy Masding to step down next year 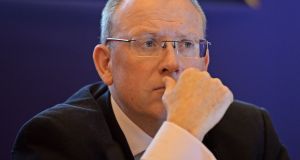 Permanent TSB (PTSB) chief executive Jeremy Masding has announced that he will step down from the bank in 2020, eight years after the Welsh banker took charge of the lender as it was struggling to remain in business.

The 75 per cent State-owned bank said that its board has commenced the process to find a new chief executive and that the effective date of his departure has yet to be determined.

“Jeremy and his team oversaw a very complex and challenging turnaround which has restored Permanent TSB to a position of significance in the Irish banking market,” said chairman Robert Elliott. “Jeremy leaves the bank in an immeasurably stronger position than when he took up the role.”

Initially tasked with convincing the Government and the European Commission that PTSB had a future after its €4 billion bailout, Mr Masding subsequently led the bank back to the main Dublin stock market in 2015. The executive completed the sale of its €6.5 billion UK loan book in 2016 after the Brexit vote, and offloaded €3.4 billion of non-performing loans (NPLs) last year without blowing a hole in the group’s balance sheet.

“The last eight years have been exceptionally challenging for our stakeholders and, in particular, for our customers,” said the longest-serving chief among Ireland’s retail bank. “However, we have succeeded in the biggest challenge which was to rebuild the bank while keeping thousands of people with significant mortgage difficulties in their homes. The bank has, and continues to be, a force for competition in a market which needs choice.”