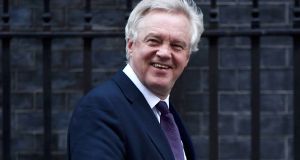 David Davis has suggested that the government would consider making contributions to the EU budget in exchange for access to the single market, saying his Department for Exiting the EU would consider all options to get the best deal with the bloc.

During questions in the House of Commons, the Labour MP Wayne David asked if the Brexit secretary would “consider making any contribution in any shape or form for access to the single market”.

Davis said the government would look at the options during the article 50 process over the next two years. “The major criterion here is that we get the best possible access for goods and services to the European market,” he said. “And if that is included in what he is talking about, then of course we would consider it.”

The prime minister’s spokeswoman said Davis’s view was “consistent with what we have said to date, which is that it will be for the UK government to make the decision about how taxpayers’ money will be spent”.

Downing Street stressed no decision had been made. “Let’s not get ahead of ourselves. We are at the stage of preparing for negotiations,” the spokeswoman said. “What we have said is that we will look at how we get the best possible deal. People are suggesting we should consider [paying contributions] and that was the response he [Davis] gave.”

The pound surged on news that the government was prepared to consider paying for access to the single market.

Sterling was up 1 per cent against the dollar at $1.26, its highest level in three weeks. Against the euro, the pound surged 0.63 per cent to € 1.18, aided by the eurozone currency’s struggles in the face of the Italian referendum on Sunday.

Iain Duncan Smith, the leave supporter and former cabinet minister, said he did not believe Davis was necessarily talking about paying for access to the single market.

“I don’t think he was answering the question that was posed to him, what he was talking about here is: how do you get a deal that allows British and Europeans to access each other’s markets without tariff barriers or artificial barriers for services?” he told the BBC’s World At One. “I don’t think there’s any deal where you can say, we’ll pay money in and you’ll allow us access, because you might as well have tariff barriers.”

The German Christian Democrat MEP Reimer Böge, the former chair of the European parliament’s budgets committee, has previously told the Guardian he envisaged that countries wishing to participate in the single market would need to pay into the common pot, or face being barred from EU programmes and funding.

“Germany, the Netherlands, Sweden and other net payers can never accept that they pay the bill for the internal market and Great Britain has access to the market without paying anything,” he said. “There will be an ongoing bill, year by year, to be a member of the internal market.”

Böge said the UK could pay up to € 5 billion a year for the highest levels of access to the single market, equivalent to the status of Norway.

Norway, a member of the European Economic Area, pays € 869 million a year to trade in the single market, take part in EU research programmes and for criminal justice cooperation.

“If you want something you are obliged to pay for it. This is part of the deal,” Böge said. “If you take the Norway calculation for the UK it will be € 4 billion to € 5 billion.”

The UK’s net contribution was £8.5 billion a in 2015, so a Norway-style deal would amount to around half the current annual EU bill on current exchange rates.

During the questions, Davis also dismissed reports that his cabinet colleague Boris Johnson privately backs continuing free movement from the EU, after reports that the foreign secretary expressed support for the system during conversations with European ambassadors.

Four EU ambassadors told Sky News that Johnson had expressed personal support for the principle of free movement and they were “shocked” by the government’s apparently “shambolic” approach.

Davis said the reported comments by Johnson “strikes me as completely at odds from what I know about what my right honourable friend believes in this matter”.

He said: “He believes very clearly, and made this clear in the leave campaign, that some immigration is useful, we all agree that. That is not the same thing as thinking that free movement as it stands is a good idea. It’s a problem.”