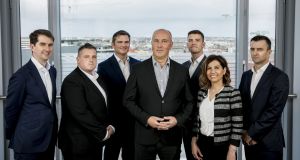 Set up in June last year, Cullaun has hired Barry O’Brien, who spent seven years with Nama, most recently as a senior portfolio manager in delivering housing units, to mainly be responsible for sourcing and negotiating new business opportunities.

Paul O’Sullivan, a former manager with Pepper and AIB’s problem loans unit, also joined in recent months as chief operations manager, while Alan Tuohy, who previously worked with IBI, has become an investment analyst with the group.

The appointment of Nahid Avesta as office manager means that the team has more than doubled to seven in recent months.

Cullaun’s first deal, closed in November 2018, supported the development of apartments in Dublin 18. Other transactions include providing finance to support Richard Barrett’s Bartra Capital’s plan to build two nursing homes: a 221-bed facility close to Beaumont Hospital in north Dublin and a 118-bed home in nearby Santry.

The lender, which is prepared to offer both junior and senior financing for projects, has also funded private and social housing schemes in Dublin and other cities.

“Cullaun Capital has experienced significant deal flow over the last 12 months, which is converting into new business,” said Mr Bell, its chief executive. “As our business expands, I wanted to bring additional experience and skills into Cullaun Capital as we strive to position ourselves as one of Ireland’s leading alternative development finance lenders.”

Mr Bell does not envisage the team growing beyond 12 or 13 staff members, as its back-office functions are handled by outside providers.

Including “some substantial” deals in the pipeline, Cullaun’s total lending is on track to reach between €130 million and €140 million, he said.

Cullaun Capital is backed by TPG Sixth Street Partners, a global finance and investment group with more than $30 billion in assets under management.

With domestic banks remaining cautious about how much finance they will provide to building projects, many Irish developers complain about difficulties in accessing capital.

Cullaun is among a number of non-bank lenders that have emerged in recent years to help plug that gap.