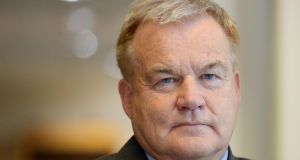 Chris Lehane: It is fundamentally important that those who try to cheat are not allowed get away with it. Photograph: Alan Betson

The financial fallout from Covid-19 is likely to result in a flood of unmanageable debt. But the bankruptcy regime they will face is much improved on the one that existed when the last financial crash hit.

That’s the view of Chris Lehane, the man charged with overseeing bankruptcies in Ireland as official assignee. Lehane, who retired last Friday, took up the post at a time when a tsunami of property-related debt was starting to hit the courts.

When he took up office in 2009, a bankrupt remained in that position for life unless a deal could be negotiated with creditors.

“I remember reading one of the files of a long-deceased bankrupt whose estate was then being discharged, where there was a note from 1920 that the bankruptcy inspector should not visit the area in Galway where the bankrupt lived, as rebel activity meant it would be unsafe for him to do so.”

In 2011 the law was changed so that people were automatically discharged from bankruptcy after 12 years. Two years later the period was reduced to three years, and in 2015 it went down to one year.

Proposals currently being examined would see the courts being removed from the bankruptcy application process, which would be shifted online, making the system “more attractive, accessible, and cheaper”.

Lehane does not believe the pendulum has swung too far in favour of the debtor, because people who are deemed not to be co-operating with the system can have their period of bankruptcy extended.

“People who come in and pay, fly out, and those who act the maggot stay in, until we find out why they haven’t been co-operating.”

It tends to be in circumstances where business partners, wives, and trade creditors have applied to have debtors made bankrupt, as against the bankrupts themselves having sought adjudication, that the bankrupts try not to comply with their obligations.

His experience is that one in 20 bankrupts tries to hide assets, but most of those come around to co-operating by the end of the year “after we have threatened and threatened” that their bankruptcy period will be extended.

Often the creditors who have sought to have a person declared bankrupt in the first place have useful information about what assets the bankrupt might be trying to hide, Lehane said.

In his experience, it is when you go back to when the bankrupt was doing well financially, and look at statements of affairs drawn up when the person was trying to convince a bank to approve a loan, that you find “the nuggets”.

Lehane is adamant that his office does not, as some have alleged, engage in asset “fire sales”. To the contrary, valuable assets that were in the estates of some bankrupts from the period after the property market collapsed, have “really come good” in recent years, as values have recovered prior to their being sold.

Bankrupts’ estates have benefited significantly over recent years, he says, from the sale by the banks of wealthy people’s property-backed loans, at discount prices, to multinational investment funds.

Some of the bankrupts he has dealt with were in partnerships with wealthy people. The loans against valuable properties that they co-owned in this arrangement were sold by the banks to investment or so-called “vulture” funds.

The funds were willing to settle with the partnerships in return for their surrendering the building that backed the loans, and walk away from the rest of the debt, said Lehane, once the value of the property exceeded the price the fund had paid for the loans.

“Some of the funds said [to the partnerships], ‘give me the asset and we won’t follow you personally’. So a lot of these big guys [the bankrupts’ investment partners] were getting millions written off in debt.”

Lehane is anxious to point out that the vast bulk of the people who have used his office over the years have been not only compliant but appreciative of the system that released them from the burden of unmanageable debt.

He also said the courts have gone out of their way to make what can be a terrifying step for each individual as painless as possible.

Because so many people play by the rules, he said, it is fundamentally important that those who try to cheat are not allowed get away with it.

“We’ve had a regime where people feel that, play ball and it’s very easy, but mess with us and we’ll mess with you,” he said, (though he didn’t use the word “mess”).

As well as having to deal with a number of very forceful and aggressive characters, Lehane has also had to deal with some downright nasty people.

“It has been very challenging from a personal security perspective and a reputational perspective.”

And it has been a “huge comfort” to have the resources of the State standing behind him, either when facing into massively expensive legal tussles, or having to wrestle assets from bankrupts “of alleged violent backgrounds”.

Dealing with people’s family homes was a particularly difficult part of the job and he is proud that he never had to evict anyone from their family home during his period as official assignee.

There are two difficult cases still going through the system, however, where he believes the office may yet have to do so.

Lehane began working for the Courts Service in 1978, and has worked in the public service for more than 40 years. But he is not finished with the courts yet.

“I was called to the bar in 1983, and I intend to practise at the bar from October, mainly in probate law, where I worked for most of my career, and in insolvency law. I regard it as a career change not a retirement.”