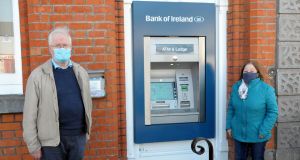 Strokestown residents Shane Lynskey and Annette Feeley: Their local branch of Bank of Ireland is to close in September.

News that two Bank of Ireland branches, less than 12km apart, are to close in Co Roscommon was met with anger and disappointment in the towns of Strokestown and Elphin.

From September, both towns will be without a bank and it has prompted an angry reaction from local business owners and residents.

Teresa Callaghan opened Healthy Beings Food Store and Holistic Centre on Strokestown’s Bridge Street in 2008. Without the local branch of the Bank of Ireland in the town, her ambition of owning her own business would never have materialised.

“As a customer of the Bank of Ireland I’m saddened by this news,” she said, on hearing the news on the closure. “Without the support of the team at that branch, I would never have been able to open my business. They gave me my business loan back in 2008 at a very bad time for the country financially. I do my lodgment there every week, so I am going to be impacted by the decision. I understand that a lot can be done online, but not everything can. I feel for the staff too in this, they’ve always been so obliging. Separate to my business, I’ve been a customer of the bank for more than 30 years, it’s another blow to Strokestown,” she said.

Teresa is also mindful of the impact that the closure will have on her elderly mother, May Wallace, another of the bank’s customers.

“My mother wouldn’t be one for internet banking – it’s people like her who have been forgotten in a move like this. These are customers who supported the banks through the worst of times and I feel for people of her generation with this news,” she said.

Shane Lynskey is a local solicitor and chair of Strokestown Town Team. A customer of the bank for decades, he described the decision as a “drastic move” for the area. “There was an element of uncertainty when only a reduced service was offered at the bank during the pandemic but this news marks a very sad day for this town.”

Mr Lynskey is also concerned as to what the news will mean for the wider economy. “My concern is that when people now have to travel to Carrick-on-Shannon, Roscommon or Boyle to do their banking, that they will do their shopping and other activities there, too. The diminution of services is a massive concern. In rural towns like Strokestown and Elphin, we need to see more services being introduced, not seeing them withdrawn,” he added.

Local resident Alan Kennedy relocated to Strokestown from Dublin in 2018 with his young family. He feels that the stripping of services from rural towns makes them unattractive for prospective dwellers.

“When you see that a town doesn’t even have a bank, it’s not sending out a great message. There are some things you can’t do online but this doesn’t seem to be taken into consideration. The heart is being ripped out of our towns and villages at a time when we should be looking at ways to revitalise them. If you’re trying to appeal for people to come back to rural towns and areas, they need the services.”

Mary Egan is the co-ordinator of Strokestown Social Service Day Care and spoke to many of her clients who are reeling from the bank’s announcement. “The people I’m dealing with range in age from 70 up to 95 and I’ve spoken to more than 10 of them today and they are furious with the news. Many of them have mobility issues, so while they can travel into Strokestown and park right outside the bank and walk in, this won’t be the case in Roscommon town where they’ll have to go to now. Many have said they’ll need to get taxis into Roscommon at a cost of up to €30 because they don’t feel comfortable driving more than a couple of miles into Strokestown. Others have pointed out the lack of privacy now that they may have to give their personal details to relatives or neighbours to carry out their banking for them. These are people who have been independent their whole lives and don’t want to share their finances with others, but they will be forced to when the bank closes in Strokestown. They feel vulnerable. Many have said that they’ll have to bypass Strokestown and do all their shopping in Roscommon town on the same day that they travel there for their banking. The town will lose out greatly because of this decision,” explained Mary.

‘Putting the boot in’

Strokestown resident and Fianna Fáil Senator Eugene Murphy has accused the bank of “pulling the plug and putting the boot in” to its hundreds of customers in the Elphin and Strokestown areas. “ Yes, there has been more of a move to online services, I can understand that. But not everyone is online. In fact, many of the bank’s customers who are of a certain age aren’t online and don’t have access to online. To say that An Post will pick up the pieces is hard to believe. They won’t get the extra staffing that they will need to take this on. The bank has attempted to justify the announcement based on a fall in branch visits over the past year. This is hardly surprising given the entire population has had its movements significantly restricted in response to a public health emergency. It seems to me that the bank is using Covid-19 as an excuse and punishing customers for following public health regulations. It’s a disgrace and shows complete lack of regard for its loyal customers,” he said.

This view is also shared by Elphin-based Cllr Valerie Byrne. “There are two ATM machines in the bank currently but, come September, we’ll have to rely solely on the one in a supermarket. How can you call that a service? News like this leads to greater uncertainty and shows that much like our government, the bank don’t care about rural communities. An Post cannot fill in the hole that the Bank of Ireland is leaving.”