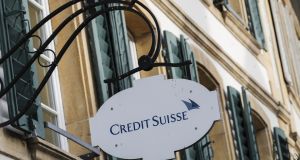 It has been reported Credit Suisse was trying to reduce its exposure to Greensill because of concerns over Greensill’s exposure to Sanjeev Gupta. Photographer: Stefan Wermuth/Bloomberg

The asset management arm of Zurich-based Credit Suisse said on Monday it has suspended redemptions from its $10 billion (€8.3 billion) supply chain finance funds over concerns about the value of the funds’ investments.

In a note to investors, Credit Suisse Asset Management said that “a certain part of the subfunds’ assets is currently subject to considerable uncertainties with respect to their accurate valuation”.

London-based Greensill Capital helps manage the supply chain finance funds, originating and processing the credits which go into the funds and helping to secure investors.

Greensill, into which the SoftBank Vision Fund, part of Japan’s Softbank Group, has invested around $1.5 billion in recent years, was not immediately available for comment.

The Supply Chain Finance funds aim to extend credit to companies secured against money they are due to receive from the sales of goods and services that have been delivered, but not yet paid for.

Traditionally this kind of invoice factoring is seen as low risk, but the Credit Suisse funds also had the right to invest in credit assets outside traditional supply chain finance, and Greensill selected borrowers which did not have traditional trade receivables, publicly available accounts for borrowers show.

Nonetheless, Credit Suisse marketed the funds as ‘low risk’ investments partly on the basis that it said almost all the money was insured. Credit Suisse on Monday declined to identify the insurers or give details of the insurance.

However, the insurance does not cover all losses.

In accounts filed in January, Greensill said the insurance policies carried first loss clauses which meant it faced potential losses of up to $1.04 billion in the case of defaults.

Greensill told Reuters last month that this did not represent a reasonable representation of the probability of default, and said $59 million was a more likely exposure.

The Wall Street Journal on Monday reported that Credit Suisse was trying to reduce its exposure to Greensill Capital because of concerns over Greensill’s exposure to metals tycoon Sanjeev Gupta.

Almost since its inception in 2011, Greensill has had a close association with Gupta’s UK-based metals and energy group GFG Alliance, helping to raise billions to help fund Gupta’s acquisition of plants around the world.

However pressure has grown on Credit Suisse to cut the funds’ exposure to GFG-related credits since the near-collapse of fund manager GAM Holding AG in 2018, following a shuttering of funds related to the purchase of Gupta bonds structured by Greensill.

GFG declined to comment on Credit Suisse’s statement or the WSJ report. Previously it said it had met all its obligations attached to its bond issues.

In 2020 Greensill sued Reuters for libel over a 2019 article in which Reuters said Greensill had issued a false statement in relation to a Gupta bond. Greensill withdrew the action after losing an early court ruling. – Reuters