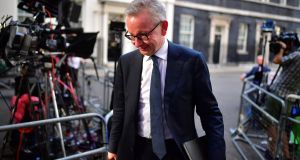 Michael Gove, the UK’s Brexit planning minister, writes in the Sunday Times that the UK government is making preparation ‘on the assumption’ that Brussels would not strike a fresh agreement

Brexit dominates many front pages and opinion pieces with the Sunday Times reporting that UK prime minister Boris Johnson has set up “a war cabinet” to deliver Brexit. In the paper, senior cabinet minister Michael Gove writes that there is now “a very real prospect” of no deal and that the UK government is making preparation “on the assumption” that Brussels would not strike a fresh agreement.

The Government has spent €58 million hiring consultants to help it do its work over the last five years, according to the Sunday Business Post. It reports Deloitte as the biggest earner, receiving €34.2 million in fees. The figures were obtained by Social Democrat co-leader Catherine Murphy. It follows last week’s criticism of the use of external advisers by senior civil servant Robert Watt.

Several papers and websites discuss talks between takeaway delivery service Just Eat and its Dutch rival Takeaway. com about a potential merger that would create a £9 billion giant with 40 million customers in 20 countries.

The Sunday Telegraph reports how speculators betting against Aston Martin have made $156 million (€140 million) this year from the carmaker’s share crash. Staying with market news, the paper also reports that US private equity giant Blackstone is set to become the biggest shareholder in the London Stock Exchange as part of a near-£50 billion (€55.5 billion) merger between the LSE and the data provider Refinement.

The Sunday Independent reports the Government plans to create 1,500 additional jobs and lure €148 billion in funds to Ireland through the introduction of new private equity and funding finance legislation. It’s aimed to tap into the increasing number of global green and sustainable investment funds.