‘By 2060 there will be one pensioner for every two workers,’ MEP warns 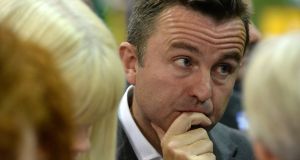 Irish MEP Brian Hayes has called on the Government to set aside some of the proceeds from any sale of shares in AIB to help fund the “pensions time bomb” he says is facing the country.

Mr Hayes noted that some €16 billion of the €64 billion used to recapitalise the domestic banks following the global financial crash in late 2008 came from the National Pension Reserve Fund.

The NPRF had been set up to help fund the State’s pension costs in future years but was raided to fund the bailout of our banks. It has since transitioned into being the Ireland Strategic Investment Fund, with a mandate to invest in the economy and employment.

Mr Hayes said the main priorities for the AIB funds should be on reducing our national debt, and putting cash aside for future pension needs.

“There is a pension time bomb coming down the tracks that we need to face up to,” the Fine Gael MEP said. “We currently have one pensioner for every four workers; by 2060 there will be one pensioner for every two workers, according to CSO projections. We need to start preparing for the huge impact pension provision will have on the State’s long-term financing needs. Putting money aside now makes sense.”

Mr Hayes said a sale of shares in AIB would be “good news” for Irish taxpayers but it was important that there was a “long-term vision” for the money.

“We can’t achieve a strong public finance position without getting our national debt down,” he said. “It’s still too high and its cost remains a worrying and persistent issue. If we do not reduce our national debt to manageable levels, it will cripple us for decades to come.

“The department of finance recently made it a priority to get our debt-to-GDP ratio down to 45 per cent by the mid-2020s. This is the correct course of action; we do not want to remain a heavily indebted country.”

1 Who are Ireland’s 17 billionaires?
2 My father in a nursing home wants to gift me his house
3 Nama lends Cosgraves €15m to fund huge apartment development
4 Are there annual limits on inheritances or gifts to a child?
5 Irish whiskey sales slow in US but distillery visitors top 1m locally
6 Pretax profits decline sharply at Tuam-based car tech firm
7 Health insurance: Switch often for your financial wellbeing
8 Cubic Telecom raises more than €11 million in funding
9 Long-hyped smart fridges will never run out of milk or data
10 Property firm sues engineering company over waterproofing of basement
Real news has value SUBSCRIBE