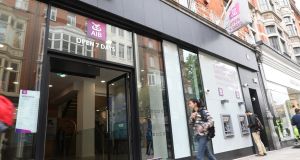 It is understood that Brendan McDonagh signalled to the AIB board late last year that he would not be in a position to become group chairman.

AIB’s deputy chairman, Brendan McDonagh, has withdrawn his candidacy for the position of chairman of the banking group for “strong personal reasons”, according to sources.

The sources said this led to a reassessment of his priorities and ability to make the necessary, significant time commitment to the role. Still, Mr McDonagh, a former senior executive with HSBC, is said to have unanimous support among his colleagues to see out his nine-year term on the board, which runs to 2025.

A spokesman for the company declined to comment, other than to say: “There is a process underway for the position of chairman and the group will make an announcement in due course.”

The Irish Times reported last February that AIB was preparing to appoint Mr McDonagh (62) as its next chairman, subject to regulatory approval, to succeed Richard Pym, who stepped down the following month. Mr McDonagh has been acting as interim chairman since then.

The Dubliner, who joined HSBC in 1979 and held various senior positions at the group across before retiring as chief executive of HSBC North America Holdings in 2010, joined AIB as a non-executive director in late 2016 and became deputy chairman in November 2019.

It is understood that Mr McDonagh signalled to the board late last year that he would not be in a position to become group chairman. The lender has not yet identified a replacement candidate.

AIB’s chief executive Colin Hunt unveiled the results of a strategic review in early December, which sees the bank target a further €150 million of cost savings by 2023.

The ultimate aim of the plan is to deliver a return on equity – a measure of profitability – of more than 8 per cent, though the timeline for this has been pushed out by a year to 2023.