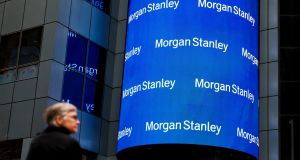 The US bank posted net income of $3.39 billion (€2.7 billion) in the fourth quarter, versus $2.24 billion a year earlier. File photograph: Justin Lane/EPA

Morgan Stanley’s earnings jumped 51 per cent in the final three months of the year, sending profits at the United States bank to a record annual high and capping a strong results season across Wall Street driven by a boom in trading and fundraising.

The US bank, which has been investing heavily in its wealth and investment management divisions in recent years, posted net income of $3.39 billion (€2.7 billion) in the fourth quarter, versus $2.24 billion a year earlier.

Earnings per share for the three months, at $1.81, were significantly higher than the $1.25 predicted by analysts in a Bloomberg poll. Revenues also beat expectations and hit $13.6 billion. Annual profits came in at $11 billion, surpassing the $9 billion record set last year.

“It was a combination [of the firm and the environment],” said Jon Pruzan, chief financial officer. “We saw exceptional support from central banks and strong fiscal policy supports during the health crisis. . . we supported our clients and were extraordinarily active and very disciplined around our risk, and that led to record results.”

The results clear the way for Morgan Stanley to spend about $2 billion buying back its shares in the first quarter, in line with a cap announced by the Federal Reserve in December.

James Gorman, chief executive, told analysts that Morgan Stanley would resume share repurchases this month and planned to increase its quarterly dividend once the Fed permits.

“There aren’t enough things we can invest in [to get the returns we’d like],” he said.

In the past two years, Mr Gorman has agreed the $13 billion acquisition of online brokerage ETrade and a $7billion deal to buy investment manager Eaton Vance.

Morgan Stanley’s investment bank was the standout performer in the fourth quarter, with sales and trading revenues rising 32 per cent year on year, as clients repositioned their portfolios amid market volatility during the pandemic.

That rise included a 31 per cent increase in fixed-income revenues, far better than the performance of the other big US banks, which was led by a 15 per cent rise at JPMorgan Chase.

Morgan Stanley’s fourth-quarter increase of 30 per cent in equities trading, where it is the world’s biggest player, was lower than the jumps at rivals Goldman Sachs, Citigroup and JPMorgan.

Morgan Stanley posted the biggest gain of its peers in investment banking – the business of advising clients on raising debt, equity and deals – with a 46 per cent surge in fourth-quarter revenues versus a year earlier amid a resurgence in dealmaking in the second half of the year.

“We enter 2021 in probably the best position we’ve been in in over a decade in terms of open, active and constructive markets, very engaged institutional and retail clients; the brand is in great shape and we have nice momentum,” said Mr Pruzan.

Executives said the integration was going well and reiterated plans for a margin in wealth management of more than 30 per cent over the medium term. In its annual strategic update, Morgan Stanley marginally increased its targets for return on tangible equity to more than 17 per cent, versus a previous target of 15 per cent. This is at the upper end of peers including Goldman and JPMorgan. – The Financial Times