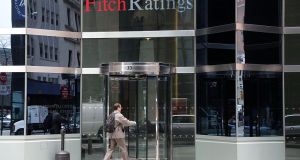 Fitch Ratings has struck a partnership with a French artificial intelligence start-up as it seeks to improve its early detection of misconduct after a spate of high-profile banking scandals around the world.

Fitch, one of the big three credit rating agencies globally, last year helped lead a $6 million (€4.9 million) funding round for Paris-based Sigma Partners, which runs software that scours publicly available information for corporate governance risks. It is now a minority owner of the business.

Rating agencies have come under greater scrutiny following their role in the 2008 financial crisis. They were criticised for exaggerating the ratings of risky mortgage-backed securities, giving false confidence to investors that they were safe for investing.

Since then they have tried to take steps to improve their methodologies and transparency. By adopting Sigma’s software, Fitch will be able to expand how it evaluates lenders’ riskiness beyond the traditional credit profile.

Sigma calls itself an “integrity rating” agency and was co-founded by counter-terrorism expert Stuart Jones and emerging markets healthcare lawyer Gabrielle Haddad, who met while on an MBA programme at Massachusetts Institute of Technology.

The group’s artificial intelligence technology sifts through more than 30,000 news sources and 1,000 other databases – such as company registries – to create a list of 12 non-financial risk indicators and 18 types of risk events that can indicate possible crime and governance risks. They are known as “early trigger events”. Mr Jones said the agency’s data set encompassed 750 million corporate entities and related people.

The deal comes amid a spate of misconduct at financial services companies in recent years, which has largely gone undetected by regulators, auditors and investors.

“The extra information provided by Sigma’s dashboard [is] giving our analysts a tool to ask the right questions to executives and to pick up worrying trends earlier,” she added.

Mr Jones previously worked at the US Treasury, a stint that included tours of duty in Afghanistan combating terrorist finance.

“The rating game hasn’t changed a lot since John Moody started on railroad bonds 100 years ago,” he said. “Financial crime risk is an increasingly important part of any credit rating, as has been shown again and again in recent years. What we aim to do is to be able to point someone to where there is risk in a matter of seconds when looking at tens of thousands of entities.”

Sigma’s software looks for red flags such as shared company addresses with sanctioned entities or corporate directors who are politically exposed persons. It also tracks trends such as high turnover in leadership roles and sudden exposure to new jurisdictions, which can indicate illicit activity.

The company then combines that data with an overall country risk assessment and assigns a headline rating of severe, standard, low or nothing found.

As well as Fitch, its other clients include Barclays (which initially helped fund Sigma via its fintech accelerator programme), Big Four accountant PwC, the EU’s Financial Intelligence Unit and the UN Development Programme.

“What Sigma is doing is pretty unique, we’ve not seen it from another start-up,” said Ian Linnell, president of Fitch Ratings.

“The way they deliver information through machine-driven analysis means it is more structured and efficient, rather than us having to go left, right and centre to pick up on signals.”

“We want our ratings to be as predictive and forward-looking as possible,” he added.