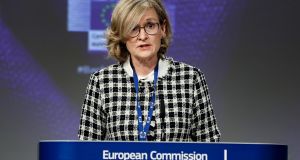 Ireland’s EU commissioner Mairead McGuinness: ‘It isn’t our objective that we’re trying to take some of the one million people’s jobs that are in the United Kingdom. But we are trying to take account of Brexit.’ Photograph: Kenzo Tribouillard/Pool/EPA

Jobs and investment are likely to continue to leave the City of London for the European Union due to Brexit, Ireland’s EU commissioner Mairead McGuinness said as she launched a plan to strengthen the bloc’s financial system.

“There has been this discussion around movement of employment and investment. Already some has happened and it is likely that more will follow,” Ms McGuinness said.

“While that is happening, it isn’t our objective that we’re trying to take some of the one million people’s jobs that are in the United Kingdom. But we are trying to take account of Brexit,” she added.

The European Commission has not yet made a series of equivalence decisions on British financial services, which would ease access for UK banks and financial firms to the single market by effectively deeming British regulations to be on par with those of the EU.

Ms McGuinness, who is in charge of financial markets and services, said that the commission was still lacking clarity on the British government’s intentions regarding regulation, and on how much it will seek to diverge from its past alignment with the bloc.

The commission would only grant equivalence where it is in the EU’s strategic interest, she added.

It comes after the biggest political group in the EU called for a strategy to encourage crucial sectors of the financial industry to relocate into the bloc.

“We need a clear step-by-step masterplan that helps key financial sector businesses move from the United Kingdom to the European Union,” said MEP Markus Ferber, who is finance spokesman for the right-wing European People’s Party, which includes Fine Gael in its grouping.

This week, mayor of London Sadiq Khan wrote in the Financial Times that the City of London had been “sidelined” in the Brexit talks and that Britain’s trade deal with the EU was “effectively a no-deal Brexit for finance”.

A new strategy unveiled by Ms McGuinness on Tuesday aims to reduce the bloc’s dependence on financial services outside its jurisdiction.

The plan seeks to develop greater capacity within the EU in financial market infrastructure and to bolster the international role of the euro as a currency.

This is important to “shield our economy and financial system from foreign exchange shocks, reduce reliance on other currencies and ensure lower transaction, hedging and financing costs for EU firms,” commissioner for the economy Paolo Gentiloni said.