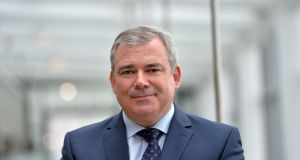 AIB’s chief executive, Bernard Byrne, said he expects house prices to “come down” after new supply of properties meets ongoing demand in two to three years’ time and “overshoots” for a period to meet pent-up demand.

Appearing before an Oireachtas finance committee hearing on Thursday, the head of the country’s largest mortgage lender said there is a current need for about 30,000 homes a year, compared to the current construction rate of about 20,000. While Mr Byrne said it may take up to three years for an equilibrium to be reached, he suggested that there is additional “pent-up demand” for an estimated additional 50,000 homes.

“Supply-demand is going to be the driver of [home prices],” said Mr Byrne, adding that “I think pricing should come down” once demand is met.

Mr Byrne also said that it is “understandable and a good thing” that the Central Bank’s mortgage lending limits are in place and that credit availability is not fuelling residential property inflation at this time.

Figures released last week by the Central Statistics Office showed that home prices rose by an annual rate of 13 per cent in March, up from 12.6 per cent the previous month, leaving values up by more than two-thirds from a low point in 2013. Still, the national index remains 21 per cent below its 2007 peak.

Meanwhile, Mr Byrne said that it is “reasonable” to expect a 500-plus reduction in headcount in the 1,500-strong team working in the bank’s division that deals with troubled loans - or so-called Financial Solutions Group (FSG) - by 2020. While he said that the employment levels may be falling over the long term, the group is also facing the “countervailing” situation is that new positions will open as the bank continues to grow.

The FSG unit has about 450 contractors, which will account for most of the expected reduction. However, sources said that the bank may seek to hire some of these individuals as their current roles come to an end.

AIB said in material provided to the Oireachtas Finance Committee before Thursday’s hearing that all of bank’s staff among 500 people currently working on the tracker mortgage examination will return to their previous roles or given new assignments when the matter is closed.