‘I have been very fortunate to have a number of mentors’ 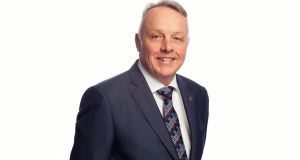 A qualified chartered accountant, Mark Whitaker spent four years away from the family business after completing his education before joining Johnson & Perrott in 1990. Initially, he took up the role of general manager of the fleet management division, growing the business threefold over the course of his 10 years in the role before being appointed chief executive in April 2001, a position he’s held for 18 years.

The business was founded in 1810 and acquired into family ownership by James Johnson in 1860. Whitaker is a sixth-generation descendant of Mr Johnson in the business, which originally began life as a manufacturer of horse-drawn carriages.

And while that’s a lot to manage, Whitaker is also busy with the company’s asset management businesses. In Tallaght, it owns and manages almost 2,000 vehicles and last year it acquired the National Truck Rental business in Ballycoolin, managing almost 1,000 vans and trucks.

With a business expecting turnover of more than €100 million this year, there’s little time for Whitaker to rest on his laurels.

What vision/lightbulb moment prompted you to go into business?

For me, the lightbulb moment was a desire on leaving college to join and support my father in the family business. I had worked a significant amount of my student time in the fleet management division and looked forward to using my skills as an accountant to lead that business to significant growth.

It is difficult to identify a standout moment but certainly our role in the development of the wonderful Opera Lane development in Cork city was a significant achievement. Johnson & Perrott had a key part of the two-block site and I led the negotiation of our partnership with the developers O’Callaghan Properties to allow Johnson & Perrott retain four retail units in the development. This was a significant contributor to profitability for the seven years we retained the units and I then led the disposal process which saw us successfully exit these retail properties in late 2017.

The realisation that we needed to dispose of the Avis Rent-A-Car business in 2011 was clearly that moment and we worked very hard to secure a sale that secured the long-term future of both Avis in Ireland and our remaining business units, and to fundamentally change how we managed the organisation going forward.

As a family member taking over the running of the family business, I have been very fortunate to have a number of mentors who have been supportive at critical times in our evolution. A key learning over the years was that one must develop one’s own leadership style (and not adopt anyone else’s) and live and promote the values that you think that the organisation should demonstrate.

Johnson & Perrott retains over 70 per cent of its after-tax profits in the business to fund future growth. As a result, we have a low level of borrowings to support our €71 million net asset balance sheet and a very significant borrowing capacity. We are confident that, should a game changer acquisition come along we will be able to fund it from our own resources and normal bank borrowing.

There are many things that one would like to see the Government do but a reduction in capital gains tax to 25 per cent would raise more revenue for Government and encourage the moving and developing of assets.

1 Google tells workers to return to country where they are employed
2 Sean Quinn stunned at rebranding of Quinn Industrial Holdings
3 Probate is changing: What does that mean for you?
4 Whistleblower warned EY of Wirecard fraud four years before collapse
5 Will tracker mortgage be at risk if Ulster Bank closes?
6 Three Ireland switches on 5G network around the country
7 Seán Quinn on rebrand, Irish golf tourism wipeout, and probate changes
8 Landlords accuse New Look fashion group of exaggerating insolvency
9 Google ups bid to clinch approval for $2.1bn Fitbit takeover
10 Dublin Aerospace takes over Flybe’s aircraft servicing base in Exeter
Real news has value SUBSCRIBE