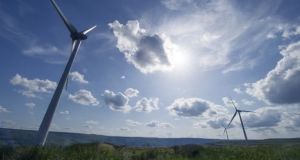 Belfast-based energy group Viridian plans to pay a €60 million dividend up to its ultimate parent group, majority owned by US private equity firm I-Squared, as it undergoes a refinancing of its debt.

The onwner of electricity and gas supplier Energia and Power NI has confirmed it plans to redeem in full its €540 million of existing bonds and issue the equivalent of €600 million of cheaper notes, denominated in sterling and euro.

The company plans to pay a £60 million (€66mn) dividend to its recently-formed Cayman Islands-based parent, Viridian Topco Limited, which was set up by I-Squared earlier this year as it sold a minority stake in Viridian to an unknown investor.

The existing debt, issued in February 2015, carries a 7.5 per cent interest rate and Viridian’s chief executive Ian Thom noted on a call with analysts late last month that its rivals’ funding costs are currently below 4 per cent, given how bond yields have fallen in the past two-and-a-half years.

Viridian passed a milestone on September 1st where it could exercise an option for early redemption of the debt, which was ordinarily not due to mature until 2020.

I-Squared, founded in 2012 by former executives from Morgan Stanley, bought Viridian in an estimated €1 billion deal last year from Bahrain’s Arcapital Bank, which owned the power company for almost decade.

1 Revised help-to-buy scheme for first-time buyers open for applications
2 Divorce: What will it cost and can you afford it?
3 Stripe lures Dhivya Suryadevara from General Motors to be CFO
4 ‘No demand... because there are no people’ at well-known Dublin pub
5 Transferring the family farm without a tax headache
6 Nearly 30,000 could lose pandemic payment if they do not confirm eligibility
7 CityJet to exit examinership after High Court ruling
8 Post-Covid television starts to shape up – but with missing pieces
9 Apple received $250bn dividend from Irish subsidiary in 2019
10 Management of Irish PR group Drury acquire agency from Omnicom
Real news has value SUBSCRIBE