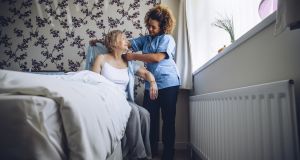 Ireland’s eldery population is growing with more people needing care and assistance at home leading to opportunities in the home-care sector.

There are significant investment opportunities on offer in the home-care sector according to , a provider of in-home care for the elderly and people with disabilities.

The company has franchises operating in Dublin, Galway and Cork and is looking to expand across Ireland and is seeking people to open new franchises.

According to David McKone, managing director of Right at Home Ireland, the elderly population in Ireland is growing at an unprecedented rate with an increasing number of people needing care to continue living independently. According to figures from last year’s census, over 637,000 people are aged 65 or over and this figure is expected to grow by 37 per cent by 2026.

This is the “fastest growing sector of our population,” according to Mr McKone. Over half a million people in this age group live in private homes. “This means there is major demand for the services Right at Home provides, and this demand is growing year on year,” he added.

An initial investment of approximately €150,000 is needed, which covers working capital and the franchise fee. While the investment is not risk free, it is a high-growth sector said Mr McKone. “Most Right at Home franchise-holders break even in their first two years in business, and begin making a profit from year three onwards,” he said.

Those looking to invest should be willing to be involved long-term in the sector, “we’re not looking for investors who are out to make a quick buck,” said Mr McKone. “We’re looking for people willing to work in partnership with the overall organisation and committed to making a positive contribution in their local community.”

Right to Home is participating in the Franchise Show in Ballsbridge in Dublin this weekend.

1 Google tells workers to return to country where they are employed
2 Whistleblower warned EY of Wirecard fraud four years before collapse
3 Sean Quinn stunned at rebranding of Quinn Industrial Holdings
4 Michael O’Leary is the boss you want to lead an airline out of crisis
5 Liberties scheme aims to challenge Dublin docklands dominance
6 Me & My Money: ‘Money can’t buy you happiness but it can make life a lot easier’
7 Subway bread too sweet for zero rating on VAT
8 Ryanair to take on online travel companies with new site
9 Irish golf tourism faces ‘wipeout’ unless Covid travel restrictions eased
10 Three Ireland switches on 5G network around the country
Real news has value SUBSCRIBE