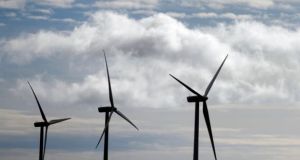 Mainstream has 160 staff across four continents who are focused on delivering more than 7,000MW of wind and solar assets in construction and development. Photograph: Sergio Perez/Reuters

The combined capacity of the two wind farms will be 250 megawatts. Put into context, this would be enough to power more than 140,000 Irish homes.

Mainstream has been awarded a total of 848MW of wind and solar projects under a South African renewable energy procurement programme since 2011. It has delivered five plants to date, with a combined generation capacity of almost 600MW.

Mainstream, which was set up a decade ago by green energy entrepreneur Eddie O’Connor, has 160 staff across four continents who are focused on delivering more than 7,000MW of wind and solar assets in construction and development, including a 1,300MW Chilean scheme being developed on foot of contracts won by the company from the country’s government in 2016.

The company has raised almost €200 million since it was set up in 2008, including €74 million from Irish high-net-worth investors. It plans to set up a grey market for trading of its shares by the end of the year before floating at the end of the decade.