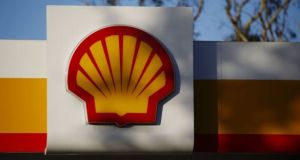 Shell’s first quarter oil production was expected to fall by 4.5% in contrast to the fourth quarter of 2019. File photograph: Getty

Royal Dutch Shell slowed refining output and will write down up to $800 million (€727.5 million) in the first quarter of 2020 after a dramatic drop in oil demand due to coronavirus.

In an update ahead of first-quarter results, Shell said it expects “significant uncertainty” over oil and gas prices and demand as a result of falling consumption.

With the global lockdown of three billion people – roughly 40 per cent of the world’s population – demand for fuel has been in free fall, forcing Shell to lower its refining output by about 13 per cent.

The sharp drop in demand, which could reduce consumption by 25 per cent compared to 2019, poses a significant threat to Shell which is the world’s largest petrol retailer with more than 40,000 service stations.

The Anglo-Dutch company lowered its oil and gas price outlook for 2020, resulting in a post-tax impairment charge in the range of $400 million-$800 million, it said.

Benchmark Brent crude prices fell by about 65 per cent in the first quarter and were trading at below $23 a barrel on Tuesday as a result of a sharp drop in global demand due to coronavirus and pledges by Saudi Arabia and Russia to raise output.

Shell shares were up 5 per cent in early trading in London.

The company said this month it would lower spending by $5 billion to $20 billion or less and suspend its vast $25 billion share buyback plan in an effort to weather the downturn.

Shell’s first-quarter oil production was expected to fall by 4.5 per cent versus the fourth quarter of 2019, while liquefied natural gas volumes were set to decline by 2.3 per cent.

Shell, which sells products produced by its refineries and other suppliers, gave a wide range for oil-products sales volumes of six million to seven million barrels per day for the first quarter of 2020.

At the middle point, the figure is slightly higher than in the fourth quarter of 2019.

Shell slowed down its refining output in the first three months of the year due to weaker demand for fuels.

The company said its cash liquidity remained strong after getting a new $12 billion revolving credit facility commitment, lifting its available liquidity from $30 billion to $40 billion. – Reuters