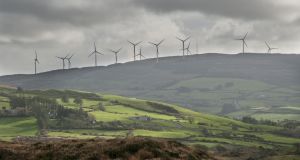 The EIB has invested over €130 billion globally in renewables. Photograph: iStock

NTR plc, which owns a raft of wind turbines mainly located in the North, has received backing for its NTR Renewable Energy Income Fund II which will support onshore wind and solar projects as well as energy storage schemes.

Dublin-based NTR is operating a €1.2 billion pan-European fund, of which €500 million is equity with the remainder in debt financing.

This funding represents the EIB’s first every backing for investment through an ICAV, or Irish Collective Asset-management Vehicle.

An ICAV is a corporate vehicle designed for Irish investment funds authorised by the Central Bank of Ireland. It is particularly useful for US investors in investment funds as it allows them to be subject to US tax as if they held the underlying assets in the fund directly.

“NTR’s new cooperation with the European Investment Bank reflects our shared goal of ensuring long-term investment in renewable energy projects essential for achieving Europe’s climate commitments. We welcome the €84 million backing from the EIB and look forward to working together in the years ahead.” said Dr Rosheen McGuckian, chief executive of NTR plc.

The EIB has been a supporter of Irish renewable energy projects in the past. In May, the bank confirmed funding of €79.5 million for the Oweninny wind farm in Co Mayo. It has also supported ESB’s electric car charging infrastructure and Eirgrid’s east-west interconnector.

Commenting on the announcement, Richard Bruton, the Minister for Communications, Climate Action and the Environment, said the Government’s goal is to make Ireland a leader in responding to climate change.

“ Being a leader means acting now, stretching ourselves and seizing the enterprise opportunities in a low carbon economy,” he said.

Outside renewables, the EIB is a significant lender in the Irish market. Last year, it provided more than €1 billion worth of financing to Irish operations. That included support for the National Children’s Hospital, a redevelopment of the Port of Cork, and a long-term loan to the National University of Ireland Galway.

The bank has also supported large infrastructure projects in the past number of years. In 2009 it agreed €260 million financing for Dublin Airport’s Terminal Two project. In 2014, it agreed to give €150 million to Luas Cross City.