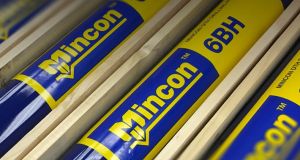 Irish engineering company Mincon Group PLC has started using a new drilling system which it claims is a potential “game changer” for the mining industry.

The Irish engineering company, which specialises in developing, manufacturing, and servicing hard-rock drilling tools, successfully fitted its Greenhammer technology on a customer rig in Australia last week. The system is “working in line with expectations”, according to an announcement by the company.

Mincon, which posted a 30 per cent rise in pre-tax profits in the first half of this year, is aiming to achieve up to three times existing drilling speeds using the new hydraulic hammer system. “The Greenhammer technology is a significantly disruptive product, delivering substantially higher performance than the existing products in the market, thus the market for it is significant,” said Colin Sheridan of Davy Stockbrokers.

If the technology is brought to market, customers will need fewer rigs to carry out drilling operations in the same time as previously. “If you need a certain number of holes drilled per day, using the old system you might need 10 rigs. Using this system you might need three or four . . . The system actually saves [the customer] a lot of capex,” said Mr Sheridan.

The technology will now undergo further testing. Mincon said it expects that this phase may take several months “while the integrity and robustness of the system in use is trialled and improved”.

Following some delays developing Greenhammer this year, its use in production now represents “a large step towards commercialisation” of the technology which and is “likely to become a game changer for both Mincon and the industry,” said Mr Sheridan. He said that Greenhammer is likely to deliver revenues in the 2019 financial year.

“While some risks to the ultimate commercialisation of the technology remain, we have now passed a critical point where the system becomes significantly more likely to be commercial,” said Mr Sheridan.

1 How can I view my dead brother’s will if I’m not the executor?
2 Investors pile into property as turnover in build-to-rent sector reaches €2.54bn
3 Provisional liquidator appointed to Dublin engineering firm
4 Bursting of Tesla bubble a case of ‘not if, but when’
5 Kerry’s Chinese sales set for 30% hit from coronavirus
6 Euro zone and Germany back fiscal boost to tackle downturns
7 Apple’s coronavirus sales warning hits global markets
8 Bank of Ireland staff in line for 2.95% pay increase
9 Walmart disappoints with weak sales volumes over Christmas
10 Must you pay a price for ethical investment?
Real news has value SUBSCRIBE