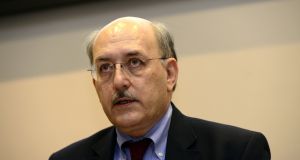 Petroneft chairman David Golder said 2018 was “a year of significant change” for the company. Photograph: Cyril Byrne / THE IRISH TIMES

PetroNeft was established to develop oil assets in the Tomsk Oblast in Western Siberia and was admitted to the London AIM and Dublin ESM Markets in September 2006.

The losses included the share of its joint venture’s net loss in WorldAce Investments of $6.3 million, which were up from $4.3 million the year before.

Petroneft said the increase was mainly due to the write-off of wells at Tungolskoye and the share of the joint venture’s net loss in Russian BD Holdings of $508,757, which was up from $381,654 the year before.

Petroneft reported revenue of $1.8 million and gross profit of $207,000. After administrative costs and exchange losses, the operating loss for the year was $1.3 million, which was marginally higher than the prior year of $1.2 million.

Its share in its West Siberian oil and gas joint venture interest was $6.3 million, resulting in an overall outcome for the year of a loss of $7.3 million compared to $2.3 million in the prior year.

Petroneft chairman David Golder said 2018 was “a year of significant change” for the company with the retirement of chief executive Dennis Francis in November.

In terms of the outlook for 2019, the company said the geopolitical and investment climate for Russia, as with other emerging markets, “remains challenging”.

“This has resulted in a significant difference between the market capitalisation of the company and the long-term value of its assets and reserves,” it said. “We are committed to narrowing that gap and are actively examining all available options to do so.”

The company said it has implemented a cost cutting program and that directors and management have agreed to reduce and defer “significant portions of their remuneration”.

Petroneft added that the oil and gas exploration industry “is continuing to experience unstable times”.

However, it but highlighted its “valuable future development targets” at West Lineynoye, Cheremshanskoye and Sibkrayevskoye “that can be profitable at a wide range of oil prices”.

Davy scandal: The who, what, where, when and why? 12:28
Donohoe to brief Cabinet on Davy scandal 11:54
Agnelli family buys 24 per cent stake in Christian Louboutin 11:52
NTMA faces decision on Davy as bond sale looms 10:32
PetroNeft completes Russian gas well deal 08:41

2 Davy scandal: The who, what, where, when and why?