UK targeting cut in fossil-fuel emissions to zero by 2050 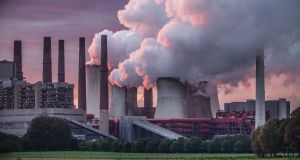 The UK has been one of the more successful countries in the world at cutting emissions and intends to stop burning coal for power generation by 2025. Photograph: iStock

Britain is to become the first major economy to adopt laws that requiring a cut in fossil-fuel emissions to zero by 2050 to fight climate change.

Prime minister Theresa May said legislation to wipe out the UK’s net contribution to rising global temperatures will be put to members of Parliament, endorsing a report from advisers that laid out what a carbon neutral future would have to look like. The radical move, recommended by the government’s climate-change adviser, has won backing from across the political spectrum even as debate about leaving the European Union roiled UK lawmakers.

Urgency is building around efforts to contain an increase in global temperatures. Ms May’s statement followed a report from the oil major BP showing carbon emissions jumped the most in seven years in 2018, an indication the world is falling behind in its efforts to rein in the pollution damaging the atmosphere.

“Standing by is not an option,” Ms May said in a statement from her office in London on Tuesday evening. “Reaching net zero by 2050 is an ambitious target, but it is crucial that we achieve it to ensure we protect our planet for future generations.”

The UK has been one of the more successful countries in the world at cutting emissions and intends to stop burning coal for power generation by 2025. Britain has slashed carbon dioxide output 44 per cent since 1990 to the lowest levels since the 1890s, according to data from the Department for Business, Energy and Industrial Strategy.

A report from the independent Committee on Climate Change recommended wholesale changes to the way the UK generates, distributes and consumes power as well as ways the public can change their habits, including flying less and driving electric cars.

There is broad political support from the main opposition Labour and Scottish National parties as well as the Liberal Democrats. Britain already has a target to cut greenhouse gases by 80 per cent by 2050, but the last fifth of that goal is likely to be the hardest reduction to make.

The move was welcomed by environmental campaigners, but they cautioned the government had left some room for manoeuvre in its plans, especially by allowing a mechanism for projects overseas to count toward Britain’s target.

“This is a big moment for everyone in the climate movement,” Greenpeace said in a statement.

“While the loopholes being woven in by the treasury will need to be unpicked, and the date moved forward, this decision fires the starting for a fundamental transformation of our economy.”

Politicians and industry will have to move quickly to get as-yet unproven technologies, such as carbon capture and hydrogen in heating, deployed at scale. No current scenario that holds global warming to 1.5 degrees celsius happens without widespread of use of these technologies.

Ms May also announced setting up a youth steering group to advise on government priorities for the environment. – Bloomberg