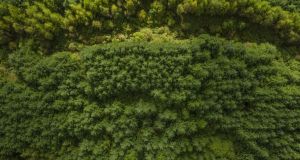 Brexit is seen as the main challenge to Irish forestry. Photograph: iStock

The State’s forestry industry is likely to invest around €250 million in coming years as it prepares for a period of major expansion.

A new trade body, Forest Industries Ireland (FII), predicted yesterday that supplies of timber will double up to 2035, boosting turnover to €1.6 billion from €800 million and adding 6,000 jobs to its current 12,000.

Speaking after the body’s launch, Fergal Leamy, chief executive of State forestry company, Coillte, pointed out that the sector has invested €250 million over the last three to four years.

“I would say that there will probably be the same amount again invested in the next few years,” he said, adding that it would be needed to process increased production from Irish forests.

FII predicts that production will double to 6.6 million cubic metres of wood in 2035 from 3.3 million in 2017. Coillte now supplies 51 per cent of this, while 21,000 private growers accounting for the balance.

Forests planted with the aid of incentives introduced in the 1980s and ’90s are maturing, increasing overall production.

Mark McAuley, director of FII, which is affiliated to employers’ body Ibec, explained that production is heading for a high point in coming decades, when it will level out.

According to Mr McAuley, Brexit is the main immediate challenge facing the industry as Britain is its main overseas market.

Michael Glennon, joint chief executive of Longford-based sawmill group, Glennon Brothers, explained that half the timber produced and processed here is exported, with 95 per cent of that going to Britain.

He pointed out that the industry fears the impact of delays at Irish and British ports, as timber is delivered to customers as they order it. “Logistics is the key issue for us,” Mr Glennon said.

Glennon Brothers recently spent €4 million on its business. The company turns over €130 million a year and has two plants in the Republic, where it employs 200 people, and two in Scotland.

Coillte has begun stockpiling timber in British warehouses to ensure it can cope with the immediate challenges that Brexit could pose.

Despite the UK’s plans to leave the EU, the industry believes that Britain will continue as its main export market. It is Europe’s biggest importer of wood and needs to build 300,000 new homes a year to tackle a housing shortage.

FII’s first chairman, Brian Murphy, who is chief executive of Enniskillen, Co Fermanagh-based timber processor, Balcas, said that the industry was confident it would prosper in the long term, even with Brexit.

“Ireland has a natural competitive advantage in forestry and timber,” he said. “Our forests are delivering more and more timber to our sawmills and the construction products they make have a strong and growing market in the UK and Ireland.”

He urged the Government to continue investing in the Forestry Programme to ensure that timber can be supplied to sawmills.

1 How can I view my dead brother’s will if I’m not the executor?
2 Investors pile into property as turnover in build-to-rent sector reaches €2.54bn
3 Bursting of Tesla bubble a case of ‘not if, but when’
4 Provisional liquidator appointed to Dublin engineering firm
5 Travel costs for IDA chief topped €45,137 last year
6 Kerry’s Chinese sales set for 30% hit from coronavirus
7 Glencore to shake up its top tier with younger leaders
8 Mount Charles wins €10m catering contract at Maynooth University
9 Germany drops opposition to fiscal boost in event of downturns
10 Legal row erupts over €85m contract
Real news has value SUBSCRIBE