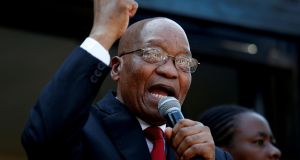 A Dublin-based oil and gas company has been drawn into a massive corruption scandal in South Africa by a whistleblower testifying at a commission of inquiry investigating public sector bribery and fraud.

Angelo Agrizzi, a former chief operating officer of multibillion rand facilities company Bosasa – which has since been renamed African Global Operations – has claimed Falcon Oil and Gas approached the firm and offered it facilities contracts in return for help to get restrictive fracking legislation in South Africa amended.

According to Mr Agrizzi, Bosasa used its close relationship with former South African president Jacob Zuma to influence policy changes to advance its business interests and get protection from investigations into its alleged corrupt activities.

In return the former president, who was forced from office by the ruling party, African National Congress, in February 2018, allegedly received bribes every month from Bosasa via his close ally former South African Airways chairwoman Dudu Myeni.

Mr Agrizzi, who worked for Bosasa for 19 years up to November 2016, claimed the company was approached by Falcon to partner it in a “fracking transaction” in South Africa’s Karoo desert. Hydraulic fracturing, or “fracking,” is a controversial process in which miners inject water, sand and chemicals in to deep-rock formations at high pressure to enable natural gas, petroleum and brine to flow more freely.

Critics of the technique say it has caused massive environmental damage in countries such as the US, where it has been deployed to tap shale gas deposits.

Falcon, which has its headquarters in Dublin, holds a technical operations permit that covers about 7.5 million acres in the southwest Karoo, which traverses the Western Cape and Eastern Cape provinces.

Such a permit allows the holder to carry out desktop studies, and acquire existing seismic and other data, but does not include any exploration activities.

The US Energy Information Administration has stated the Karoo basin has potentially the world’s eighth-largest deposits of shale gas, with an estimated 390 trillion cubic feet of the resource technically recoverable.

However, in 2017 geologists at the University of Johannesburg estimated the Karoo’s gas resources was probably at just 13 trillion cubic feet.

Giving sworn testimony at the Commission of Inquiry into State Capture, Corruption and Fraud in the Public Sector, Mr Agrizzi said that what Falcon was looking for was influence with Mr Zuma in return for contracts to manage its Karoo operations.

“I knew the reason they brought the transaction to us was because Gavin [Waston, chief executive of Bosasa] had a close relationship with Dudu [Myeni], and obviously there would be influence with the president there,” he told the inquiry.

Mr Agrizzi went on to say that legislative restrictions were impeding oil and gas companies from fracking in the Karoo and these needed to be amended if the potential resource was ever to be tapped.

“At the meeting we told the president [Mr Zuma] his intervention was required to advise the minister of mineral resources to affect the legislative changes the oil and gas industry required,” Mr Agrizzi explained.

When he was asked what the outcome of the meeting was, Mr Agrizzi said it was “extremely successful” and the ministers’ legal advisers were “instructed to meet with Lizel Oberholzer and to make amendments where necessary”.

Mr Agrizzi conceded he was not at the Nklandla meeting, but he maintained he was informed by those who were that it was successful.

Falcon chief executive Philip O’Quigley confirmed to The Irish Times that he and Mrs Oberholzer attended a meeting with South Africa’s former president in 2014 that was facilitated by Bosasa, but he denied the company was offered contracts in return for setting it up.

“In 2014, Mr Philip O’Quigley, as chairman of the Onshore Petroleum Association of South Africa, and Mrs Lizel Oberholzer attended a meeting facilitated by Bosasa with the then president of the republic, Mr Jacob Zuma.

“Mrs Oberholzer provided technical and legal explanation of the status of the industry and the constitutional challenges that the [new fracking] Bill might face, [and] much of the information was already in the public domain,” he said.

Mr O’Quigley added he provided a brief overview of the status of the South African oil and gas industry to Mr Zuma, but he maintained “Falcon never offered Bosasa a contract of any nature”.

Mr O’Quigley also confirmed that Falcon obtained its technical co-operation permit for an area of the Karoo in 2009, and that the oil and gas company made an application for an exploration permit a year later.

Our “application for an exploration permit is still pending”, he said.

According to Karoo anti-fracking activist Jonathan Deal, no fracking exploration licences have been issued to mining companies in South Africa to date. However, he said recently introduced legislation was considered problematic by those opposed to fracking. South Africa introduced new fracking regulations in 2015 under the Mineral and Petroleum Resources Development Act.

“From the outset when the legislation first appeared we have objected to its lack of specificity. It ignores the science around fracking and the empirical evidence related to it. It doesn’t go close to addressing concerns around shale gas mining,” he said.

1 Two prominent business leaders in planning row with neighbour
2 Should my mam wait for house prices to drop before buying?
3 Cheers: Conor McGregor's whiskey races up the sales chart
4 ‘I’m so lucky to be in the Caribbean – a million miles from Derry Girls’
5 Chris Johns: Past is another country when it comes to our post-pandemic future
6 Joint accounts: if one of us dies, can the other access the money?
7 Why we’re about to learn if we are really in the A-team
8 Military-style planning can help businesses battle Covid-19 survival threat
9 Citigroup warns that markets are out of step with reality
10 ‘The recovery needs to be a full-scale economic renewal’
Real news has value SUBSCRIBE