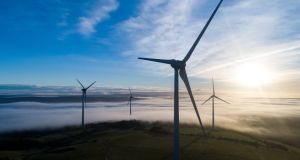 Greencoat Renewables achieved net cash generation of just over €40 million, up from €34.8 million the year before

Dublin-listed energy investor Greencoat Renewables recorded income and profit during the first six months of the year that were largely in line with the same period in 2019 as it remained mostly unaffected by the Covid-19 pandemic, its interim report shows.

They show the company achieved net cash generation of just over €40 million, which was up from €34.8 million the year before. Its revenue for the period amounted to €66.3 million.

A decrease in portfolio valuation of €10.9 million was said to be “predominately due to portfolio depreciation and adjustments to short-term inflation”.

Ronan Murphy, non-executive chairman of Greencoat Renewables, said: “Given the circumstances, I and the board also feel fortunate that our company has been able to continue operating relatively unaffected, where many others have not.

“In the first six months of the year, we have continued to grow the portfolio with ongoing consolidation in Ireland and our first acquisitions on the continent – a source of significant opportunity for the company.

“We have also delivered strong operational performance and robust dividend cover in keeping with the company’s strategy. The outlook for the business remains positive with a strong pipeline for further growth both in Ireland and Northern Europe.”

Greencoat said wind speeds were high in the first half of the year for the Irish portfolio, but there was a higher than expected level of uncompensated grid curtailment mostly due to lower electricity demand as a result of the Covid-19 pandemic.

“Wind farm availability has not been significantly affected nor has turbine operations and maintenance, which continues with appropriate social distancing and diligent use of personal protective equipment where major component changes have been necessary and social distancing has not been possible,” the company said.

In terms of outlook, it said there was “no material exposure” to the current low market power prices and dividend cover is expected to remain robust for the rest of the year despite the difficulties presented by the pandemic.

“The board continues to view Ireland as a very attractive market for further investment, and believes the company is very well placed to continue its aggregation strategy and deliver value for its shareholders,” it said.

“Following the recent first successful auction, we expect the group to target investments in Renewable Energy Support Scheme assets, both in wind and solar PV.

“Given the emergence of a growing pool of solar assets in Ireland, the group intends to seek approval at the company’s next general meeting to include Irish solar as part of the company’s investment policy.

“The group also recently completed its first successful investment outside of Ireland. With an attractive emerging pipeline in the Nordic region, the company also amended its investment policy to add Denmark, Norway and Sweden to the list of jurisdictions the group can invest in.”