Kinsale gas fields, which were discovered in 1971, once supplied all the State’s natural gas 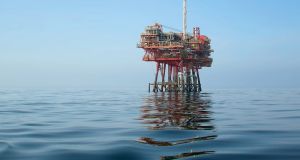 Stena Drilling, a division of ferry operator Stena Group, has won a multimillion euro contract to decommission one of the State’s largest gas fields.

The move comes after Government earlier this year formally consented to a plan submitted by Kinsale Energy to end production at the Kinsale gas fields, which lie approximately 50 km off the south coast of Cork.

Work on decommissioning is due to start in April 2021 with Stena Drilling appointing AGR Well Management as the lead contractor managing the work. Overall, there are 10 wells to decommission.

Gas production from the wells was shut in on July 5th when all the gas reserves in the various fields were depleted. The wells will now be permanently plugged with cement and associated facilities – platforms, pipelines, cables, subsea structures and onshore terminal – will be decommissioned.

The offshore infrastructure consists of two steel platforms – Kinsale Alpha and Kinsale Bravo - that were installed as part of the initial field development in 1978. There are also a number of underwater (subsea) wells which were drilled to produce smaller gas discoveries. These wells are connected to the platforms by means of underwater pipelines and control cables. A 24-inch pipeline connects the platforms to a gas metering terminal at Inch Co. Cork, which connects to the national gas network.

The offshore decommissioning activities are expected to take place over a period of between two to three years with onshore works at Inch Terminal set to be completed in just six months.

The Kinsale Head gas fields were discovered in 1971 by US company Marathon Oil and developed in 1978. It was the Republic’s only indigenous source of natural gas from 1978, when production began, to 1995 when it hit its peak of 99 billion cubic feet a year. The field has been in decline since then.

By the time gas production ceased in 2020, almost two trillion cubic feet of gas had been produced at the gas fields, double the original reserve estimate.

Kinsale Energy, which manages the field, was acquired by Petronas in April 2009.