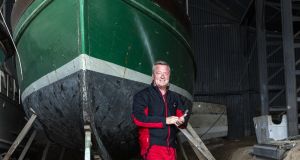 Green Rebel Marine, a new company established by well-known businessman Pearse Flynn, is to create 80 jobs in Co Cork as part of a €10 million investment.

Mr Flynn, who previously sold his company Newbridge Networks to Alcatel for over $7 billion before going on to establish Damovo and then CreditFix, founded the new company to service the future needs of offshore wind farms.

“Windfarms have transformed towns that are servicing them such as Great Yarmouth in England and Eyemouth in Scotland,” he said.

“Cork harbour is the second largest natural harbour in the world behind Syndey and it is obvious that it can become a base for the whole of Ireland.”

As part of the new investment, which Mr Flynn is funding himself, Green Rebel Marine has acquired Crosshaven Boatyard with the intention of using the nine-acre site as the base for a new operation to survey, equip and service a network of planned wind farms along the Irish coast.

The businessman, who comes from Ballycotton, has also acquired two specially equipped ships with the first vessel, the Bibby Athena, which will be renamed as Roman Rebel, already arrived in Cork.

The company said plans for offshore wind farms are at an advanced stage with a number of potential fixed and floating operators examining sites along the Irish coast.

“There are billions being deployed here across the three phases, which are development, constructionand operation and we’re very much at the start of this and I want to turn Cork into a floating wind farms’ centre of excellence,” he said.

He added the State has the potential to become a net exporter of electricity within a decade, instead of relying on imported fossil fuels.

“Ireland is on the verge of a green revolution that will deliver five gigawatts of energy from wind not generated on land, but far out to sea. Green Rebel Marine will work alongside the operators of this new array of wind turbines to ensure they remain operational by using skilled mariners who are trained here,” he said.