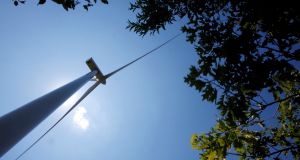 A report by the Irish Wind Energy Association (IWEA) says planning decisions need to be made faster if the scale of renewable energy expansion in a very tight timeframe is to be realised. File photograph: Reuters

Ireland will miss the Climate Action Plan’s target of achieving 70 per cent of electricity from renewable sources by 2030 “because of a broken planning system”, according to new report.

The target is a key element of the programme for Government and considered vital to meeting a commitment to achieve a 7 per cent annual average reduction in carbon emissions over the next decade.

The study commissioned by the Irish Wind Energy Association (IWEA) was completed by its 70by30 working group, which represents a broad cross section of energy sector interests. It says planning decisions need to be made faster if the scale of renewable energy expansion in a very tight timeframe is to be realised.

A typical wind energy project, it says, takes between eight and 12 years to complete. Timelines for planning appeals to An Bord Pleanála are currently 59 weeks instead of the board’s own 18 weeks statutory objective.

Ireland has the highest share of electricity demand met by onshore wind in the world with almost 37 per cent of electricity coming from this source in the first half of this year.

This puts Ireland on track to reach its 2020 target of 40 per cent renewable electricity but targets for 2022 and later in the decade will be harder to meet, the report warns.

The climate plan target requires an additional 4,000 megawatts (MW) of energy generation by onshore wind farms by 2030 (reaching 8,200 MW overall), an investment of some €5 billion by the sector, saving hundreds of millions annually in fossil fuel imports.

“A business-as-usual approach means the best Ireland can hope for is approximately 5,500 MW of onshore wind by the end of the decade. This is well short of our climate change commitments,” the report adds.

“Ireland simply cannot afford a ‘business as usual’ approach over the next 10 years. We are conscious that the timelines for what we are proposing are extremely short. We are aware that carrying out these kinds of substantial legislative, policy and regulatory changes within the next two years is unprecedented,” it adds.

Coillte portfolio director Paul Blount, chairman of the 70by30 group, said the State has “the resources, the skills, the technology and the experience” to reach the targets.

“What we lack is a policy system which will enable the successful cost effective and rapid deployment of renewable electricity,” he said. “We have one of the world’s most successful onshore wind industries; enormous offshore wind potential and a growing solar sector.”

IWEA chief executive Dr David Connolly said the planning system needed to be reformed and adequately resourced. He stressed the recommendations would not undermine the ability of individuals opposed to renewable energy projects to argue their cases.

“This right must be protected. Our members must continually improve how we engage with communities and no developer can be allowed to ignore legitimate local concerns.”

Minister for Climate Action Eamon Ryan last week admitted that uncertainty over planning and grid connection was an obstacle to progress on renewable energy. He said new wind energy guidelines “need to be in place by the end of the year for local communities and the industry” and that having more renewable projects would reduce electricity prices for consumers.