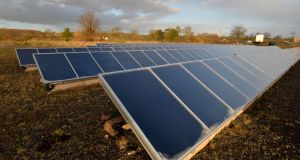 BNRG and Dirigo recently sold eight solar projects to US investment giant Carlyle in a deal that will see the buyer pay $150m to build the power plants. The Irish company and its US partner will then operate the facilities

Irish solar energy specialist BNRG has struck new electricity-supply deals in the US state of Maine, boosting its total investment there to €250 million.

Dublin-based BNRG develops and operates solar farms in the Republic, Europe, the US and Australia.

The company confirmed that its joint venture with local player Dirigo Solar has won contracts to supply electricity to utilities Central Maine Power and Versant Power for 20 years.

BNRG’s and Dirigo’s proposed solar farms at Augusta and Eddington will supply electricity to the two companies under contracts awarded by the Maine Public Utilities Commission.

The deal will guarantee both BNRG plants’ revenues for 20 years, after which they can trade on the open market or agree new power-supply contracts with electricity companies.

Along with existing projects, BNRG says that the latest contract will bring to $290 million (€250m) the joint venture’s total projected investment in Maine, making it the biggest solar power player in northeastern US.

BNRG and Dirigo recently sold eight solar projects to US investment giant Carlyle in a deal that will see the buyer pay $150 million to build the power plants. The Irish company and its US partner will then operate the facilities, with an option to benefit further should earnings from them overtake expectations.

David Maguire, BNRG chief executive, said that the venture intended keeping the Augusta and Eddington plants rather than selling them.

He explained that up to now the company’s approach has been to develop power plants, then sell them after a period to generate cash for reinvestment.

“We have achieved good prices, so we are sufficiently capitalised,” said Mr Maguire.

He added that the revenues from the two plants would open opportunities for the business, including energy storage and extending the facilities themselves as the market grows.

In the Republic, BNRG recently secured agreements to supply the Irish grid with electricity from three solar power plants in Wicklow and Kildare in the State’s renewable energy support scheme.

Those plants are scheduled to come into service in the second half of 2021, the company said.

1 Revenue publishes list of companies tapping State for wage support
2 Trump vs Biden: Stakes are high for the Irish economy
3 How long can Government afford to keep State pension age at 66?
4 Unity Technologies acquires Dublin IT company for €4m
5 Missing Wirecard executive could be Austrian spy, prosecutors say
6 Stripe moves payment processing to Dublin due to Brexit
7 Irish homeowners must see rates relief if they make it through Covid turmoil
8 Tighter regulations for car makers will drive buyers to choose electric
9 Will remote working become the norm?
10 Corporate America is breaking with Donald Trump
Real news has value SUBSCRIBE