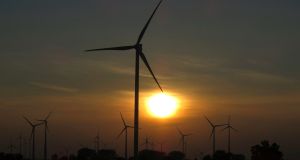 The financing has been advanced by Proventus Capital Partners II AB. It is the fourth time, since December 2012, that Proventus has been involved in Gaelectric funding.

Henrik Bjerklin, investment director with Proventus Capital Partners, noted its funding of Gaelectric had supported the transition of its wind projects to operational status.

“Its onshore portfolio is grounded in projects with consents and grid connections in place, locations with strong wind resources and good generation technology,” he said.

Gaelectric head of corporate finance Tom Nolan said the company was growing its operational onshore wind portfolio from 66.4MW currently to 177.6MW by the end of the year, with construction on a further 66.35 MW starting this year.

The Proventus deal follows Gaelectric’s recent announcement of an extended facility with Nord/LB of £53.3 million on its 42 MW Dunbeg wind farm in Co Derry. Overall, the Dublin company has raised in excess of €220 million in equity and debt financing since 2012.

1 Who are Ireland’s 17 billionaires?
2 Former workers stole confidential information, O’Flynn tells court
3 Are there annual limits on inheritances or gifts to a child?
4 MEPs reject Central Bank’s Gerry Cross for key banking role
5 Court dismisses part of action over claim of ‘catastrophic losses’ on pension schemes
6 Ireland has EU’s most progressive tax system, study finds
7 Ryanair application for injunctions against Skyscanner gets April date
8 Cairn Homes gets permission for 426 homes near Greystones
9 Phil Hogan says EU ready to do ‘ambitious’ UK trade deal
10 My father in a nursing home wants to gift me his house
Real news has value SUBSCRIBE