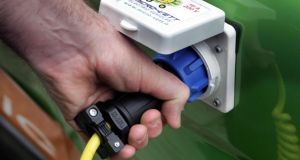 While the energy sector was expected to do the heavy lifting in adopting renewable energy and reducing carbon emissions, it faced big challenges, he told the Energy Ireland conference in Croke Park.

“In effect, this means Ireland must reduce emissions from transport, heating and electricity generation from 37 megatonnes [of carbon] in 2016 to just over six megatonnes in 2050.”

Over this period, its population is expected to rise by 30 per cent, resulting in half a million new homes being built and potentially a million more cars on roads. In the absence of major behavioural change, this would generate even more carbon, he said.

“As an industry and as a nation we need to completely rethink how we use energy and where we get it from, but it is not clear yet what this means in practice. Practical, affordable plans are needed that can drive immediate action. We don’t have the luxury of time to wait around for breakthrough innovation to happen,” Mr O’Doherty said.

Heat pumps and electric vehicles offered immediate and long-term carbon savings. “To meet targets, we envisage that 30 per cent of households will have a heat pump by 2030 and 60 per cent of new car sales will be EVs . . . In our vision for the future, chimneys will no longer feature on new houses nor exhaust pipes on new cars,” he said.

Ervia chief executive Mike Quinn said, however, that using renewable gas in the State-owned gas network could “drastically reduce CO2 emissions generated by heating one million homes at a third of the cost of electric heat pumps currently incentivised by the Government”.

He cited a KPMG report (commissioned by Ervia) which “found the installation of electric heat pumps in a million urban homes would also be more complex than using renewable gas for homes close to the State-owned gas network”.

Ireland is a world leader in availability of offshore wind resources but risks missing out on a revolution in this sector because of an absence clear indication that it’s open for this business, according to SSE Ireland managing director Stephen Wheeler.

The continued lack of any renewable electricity support scheme (RESS) as well as grid access for offshore wind energy was undermining investor and supply chain confidence in the potential to develop this low-carbon industry, Mr Wheeler said.

“Ireland has one of the strongest offshore wind resources in the world, yet is one of the only countries in Northern Europe not developing offshore wind capacity. This is due to the historic and continued lack of any standard support mechanism and grid access for offshore wind energy in Ireland.”

Minister for Climate Action and Environment Denis Naughten said that in light of spatial restrictions onshore, offshore wind and wave energy assumed greater importance. He recognised it offered huge opportunities for Ireland. It was not just about landing electricity to Ireland, “but exporting it, and bypassing the island and connecting directly into the European electricity grid”.

The new RESS to assist Ireland in meeting its renewable energy contributions out to 2030 was likely to be approved by the Cabinet in coming weeks, he said.

The National Development Plan includes provision for changing out oil-fired boilers to electric heat pumps, along with the provision of roof solar, in at least 170,000 homes, he added.

The growing importance of offshore energy projects should be seen in the context of spatial and social constraints on new onshore wind and solar PV developments, in spite of their continuing importance in the energy mix, said Sustainable Energy Authority of Ireland chief executive Jim Gannon.

It was not widely acknowledged but Ireland had decoupled economic growth from energy-related CO2 emissions in 2013 and 2014, he added, which showed the benefits of effective policy interventions and the private sector working together.

But his company recognised the need to go further and introduced Bio-LPG, derived from a by-product of biodiesel production, to Ireland recently. “This means businesses in rural Ireland are on the same playing field as businesses in Dublin and Cork in terms of the advancements they can make to their green credentials,” he added.

1 HSBC board rethinks overhaul and seeks even deeper cuts
2 ‘Over 1,000’ pubs have interest in Covid-19 insurance test case
3 Will remote working mean an end for the corporate HQ?
4 Pricewatch: Coronavirus has given us four categories of shopper
5 A Smigin of language goes a long way for well-travelled Cork woman
6 Reopening economy does not cause coronavirus spike – researchers
7 Fruit and vegetable firm obtains interim court orders against technical manager
8 EU parliament may block fund unless it has grants which do not need to be repaid
9 Eir sells mobile mast infrastructure company for €300m
10 EU divisions laid bare by ‘frugal four’ Covid recovery proposal
Real news has value SUBSCRIBE