State holds part of reserve in NI and Wales, which might be a problem if UK leaves bloc 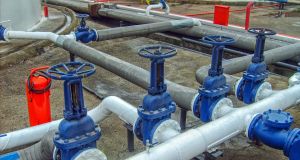 Brexit threatens to leave the State in breach of EU rules governing emergency oil stocks that the State must hold against shortages.

Under International Energy Agency and EU rules, the Republic must keep 90 days of oil supplies in reserve, here or in other member states, as a safeguard against possible shortages.

It has emerged that the UK’s departure from the bloc, particularly in a hard or no-deal Brexit, could leave the State in breach of the EU regulations, as it holds part of the reserve in Northern Ireland and Wales.

According to the Department of Foreign Affairs, the Government intends to tackle the issue in plans for a hard Brexit, now thought likely if the UK parliament does not support an agreement that UK prime minister Theresa May negotiated with Brussels.

The National Oil Reserve Agency (Nora) holds 57 per cent of the 90 days’ supply here. As the Republic does not have the capacity to store its entire reserve, 9 per cent is kept in Northern Ireland and 12 per cent in Wales, with 22 per cent in other EU States.

While keeping the oil in Wales and Northern Ireland after the UK leaves the EU on March 29th will still satisfy IEA rules, it will not comply with the European directives.

Those rules only allow countries to hold their reserve themselves or in any other EU state with which they have a bilateral agreement.

The Department of Foreign Affairs says that after the UK’s withdrawal, the Government’s “strong preference” would be that the emergency stocks held in the North and Wales still count as part of the Republic’s EU obligation.

“This however depends on the detail of any final Brexit agreement between the EU and the UK,” the department said.

“In the meantime it has been recognised as an issue to be considered as part of the Government’s overall contingency planning process.”

Meanwhile, the State company responsible for Ireland’s natural gas network said yesterday that Brexit would have “low” impact on supplies of the fuel, some of which we import via Scotland.

Gas Networks Ireland explained that the Corrib natural gas field off the west coast supplied more than half of the country’s needs and would play a leading role into the next decade.

It said the UK wanted to continue co-operating with the Republic on energy security.

“Gas Networks Ireland transports gas through our network to Northern Ireland and the Isle of Man,” the company said. “We believe that there is a desire at intergovernmental level to maintain the close co-operation that exists in our energy systems.”

Ireland generates about 60 per cent of its electricity from burning natural gas.

While neither jurisdiction has to apply tariffs to the fuel following a hard Brexit, should that happen, the extra cost would add €5 a year to the average domestic bill.

5 Fly Leasing reported to be considering a sale

7 Barclays to use Dublin to build European private banking business

8 Why UK supermarkets are not making super profits