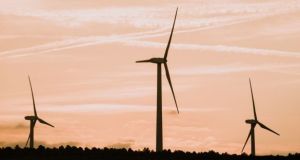 Davy said that Greencoat now represented just over 10 per cent of the Irish wind farm market.

Greencoat said the deal is in line with its investment policy, and follows the acquisition of a 48.3MW wind farm at Ballybane, Co Cork, in October for €61.3 million.

Greencoat has grown its portfolio almost three-fold over the past 12 months. Bertrand Gautier, a partner at Greencoat Capital, said: “We are very pleased with the transaction, and to be adding significant capacity to our portfolio as well as deepening our relationship with BlackRock.

Greencoat will acquire the Monaincha wind farm in Co Tipperary, which consists of 15 Nordex N117 turbines with a total capacity of 36MW. It benefits from the REFIT 2 tariff until September 2029.

It will also acquire the Garranereagh wind farm in Cork. It consists of 4 Enercon E82 turbines with a total capacity of 9.2MW, and benefits from the REFIT 1 tariff until December 2027.

“In Monaincha and Garranereagh, BlackRock has developed two high-quality assets, both benefitting from high load factors, and a long REFIT life extending to the end of the 2020s,” Mr Gautier said.

Davy said the deal “bookends a very successful year” for the company, and Greencoat now represented just over 10 per cent of the Irish wind farm market.

The deal will be financed via Greencoat’s increased revolving credit facility of €380 million and is expected to close by end December 2018.