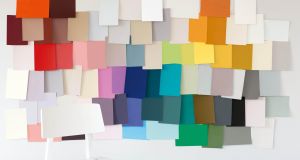 Get out those paint sample charts: another lockdown means another surge in spending at hardware shops

We’re spending more on toys, books, plants and paint and doing much more of our shopping online, as spending for Christmas proceeds apace despite Level 5 restrictions.

This is according to the latest spending analysis from emoney provider Revolut, which is based on data from more than a million Revolut customers in Ireland.

Based on the spending habits of Revolut users, the figures offer an insight into how the latest restrictions have affected consumer spending.

The biggest move, unsurprisingly, is the shift towards online shopping, which has facilitated consumers to actually spend more in October than they did in the same month in 2019.

According to Revolut, while spending largely moved online during the last lockdown (one day in May, for example, saw half of the day-to-day expenditure carried out on the web), online shopping dropped back to about 30 per cent of spending once shops reopened.

According to Sebastian Hamilton, head of public affairs with Revolut Ireland, November 1st marked the first time that more consumer spending was carried out online than in person (51 per cent of all spending).

“And it has remained there since,” he says. Another trend evident in this lockdown is that consumers outside Dublin have accepted online shopping far more readily during this lockdown than they did first time around.

This upswing in online shopping is no doubt driven by the pre-Christmas rush, with many households fearful of how Covid-19 might affect the supply of some popular festive goods and unwilling to wait until shops reopen.

The sustained spending by Revolut consumers in Octobers ties in with official figures from the Central Statistics Office, which showed that retail sales were 9.7 per cent higher in September 2020 than they were in 2019.

Toyshops have been among the biggest winners, with spending up 166 per cent year on year. In October 2019 Revolut users who spent money in toyshops forked out an average of €44.95 during the course of the month. This year that figure was almost twice as much, at €81.42.

Pet shops have boomed ever since the first lockdown, with monthly spending in October up 111 per cent year on year, with garden centres, florists and bike shops also all performing strongly.

Unsurprisingly, off licences have also fared well, with spending up 70 per cent for the month compared with October 2019.

Bookshops have also boomed, with spending up 53 per cent compared with October 2019.

Unsurprisingly, restrictions have hit some sectors harder than others. Spending on a night at the cinema, for example, has plummeted, down 95 per cent on the year, with spending on airlines down 81 per cent, and taxis also down significantly, by 58 per cent. Consumers are now spending 55 per cent less on eating and drinking out, while we only spent 25 per cent of what would usually be spent on hair care in the last week of October.