‘The Swabian housewife has learned to act more like a Swabian SME,’ says academic 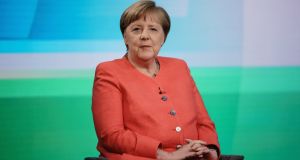 German chancellor Angela Merkel: ‘The claim she only ever follows public opinion is not true.’ Photograph: Clemens Bilan/Pool/EPA

A decade ago Angela Merkel was crowned Europe’s austerity queen for – in the eyes of hard-hit euro crisis countries – demanding cuts as her price for bailouts rather than allowing anti-cyclical debt-financed spending.

Now, after a decade of balanced budgets, and leaning on its neighbours to do the same, Germany’s biggest economic slump since the second World War has seen Berlin embrace debt-fuelled spending in a big way.

Rather than admit a Saul-to-Paul conversion on debt, Dr Merkel has framed debt-financed stimulus programme as a sign of consistency rather than change, with extra financial wriggle room thanks to years of prudent budgets.

“If we did nothing [now], then the debts and losses [would be] even greater,” said Dr Merkel on Thursday evening. She added that, in her mind, it was the role of the state to “flank businesses fighting for survival”.

Leading German economist Lars Feld knows such words will surprise some EU neighbours, who still remember the sting of Germany’s crisis-era economics. This €130 debt-financed stimulus package, he jokes, might have these critics wondering now “what they’re smoking” in Berlin.

As head of the “economic wise men” body that advises the federal government, Prof Feld says the past decade has seen lively debate about public debt and so-called “debt brakes” to limit government borrowing. At the same time, he says some Germans have realised that the flip side of balanced budgets is often sinking public investment, shabby schools and rusting bridges.

While public opinion on debt has softened somewhat, he sees less shift in the political sphere. A clear leftward shift by Dr Merkel’s Social Democrat (SPD) junior partners has, to date, been held in check by her centrist SPD finance minister, Olaf Scholz, and debt doubters in her own Christian Democratic Union (CDU).

Meanwhile in the chancellery and finance ministry, Prof Feld says, thinking is more pragmatic than a decade ago but not fundamentally different: borrowing must be sustainable, time-limited and paid off as soon as the recovery allows it.

“There is a realisation here that this is the worst collapse in postwar history so we need the full fire brigade,” he said.

Austrian-born economist Gabriel Felbermayr, now president of the Institute for the World Economy in the northern German city of Kiel, sees the stimulus package in the context of a wider shift in German politics.

A generational shift in Berlin officials in the past decade has broadened and internationalised economic thinking beyond the traditional debt aversion of Germany’s once-dominant ordoliberal school of economics. That in turn, he thinks, has helped German politicians develop their thinking – and improve their timing.

“Politicians have learned in the last decade the need to respond quicker, not just for Germany but for Europe, ” he says, a process that has boosted the readiness to leave previous comfort zones.

“The Swabian housewife hasn’t died,” suggests Prof Felbermayr, a nod to a national thriftiness trope. “She’s learned to act more like a Swabian SME: save in the good times, invest prudently in the bad times and make the occasional visit to the bank.”

For Prof Ferdinand Fichtner, who teaches macroeconomics and economic policy at Berlin’s University of Applied Sciences, Germany’s stimulus embrace of debt-finance spending – even among Germany’s notoriously quarrelsome economists – has been softened by by very favourable conditions.

Interest rates on 10-year German sovereign debt have plunged from more than 4 per cent in 2007 to -0.84 per cent today. For Germany at least, debt has never been such good value.

“You can afford to be a bit more relaxed on debt,” says Prof Fichtner, “if you’re not paying any interest and the money is effectively free.”

In the end, the swift agreement of the package is testament, Prof Feld thinks, to good political leadership.

“Dr Merkel always pushes through a clear line when it’s needed,” says Prof Feld. “The claim she only ever follows public opinion is not true. In her actions now I see more continuity than is often noticed.”

Not everyone in Ireland is rejoicing at Germany’s embrace of its inner Keynesian. Ryanair has vowed to challenge Berlin’s €9 billion emergency investment in Lufthansa, describing it as illegal state aid that distorts the market to the detriment of private operators.

But, in this unusual pandemic period, even Ryanair chief executive Michael O’Leary found grudging words of praise for Carsten Spohr, his opposite number in Lufthansa, for grabbing his slice of German crisis pie.

“If you manage to get €9 billion from Mrs Merkel then you’re a genius,” said O’Leary to Die Zeit weekly. “I wish I could convince the Irish Government to give me money like that.”

1 ‘My rent here is so low it’s a joke’
2 Belgium helps Ireland to a Brexit boon
3 Can Grafton Street stop the flood of closures?
4 Goodbody’s planned €155m sale to Bank of China falls through
5 ‘Sad day’ for House of Ireland as tourism retailer goes out of business
6 Two Irish entrepeneurs shortlisted for leading innovators prize
7 New Powerscourt Springs hotel to open in defiance of virus gloom
8 Coronavirus: Over 1m workers may face tax bills of up to €2,800 at end of the year
9 Bank of Ireland launches €200,000 prize fund
10 Will family’s tax debt stop me getting my inheritance?
Real news has value SUBSCRIBE