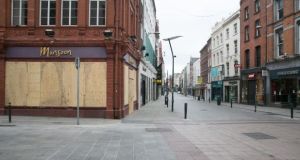 The latest figures lay bare the changed employment landscape in the Republic. The jobless rate was less than 5 per cent in February.

The Republic’s unemployment rate remained at a near record high of 26.1 per cent in May, but down from a pandemic peak of 28.3 per cent recorded in April.

The CSO’s latest unemployment data suggests there could have been as many as 645,000 unemployed people in the State last month.

The total, however, includes those claiming the Government’s temporary pandemic unemployment benefit. Many of these people are likely to return to work once the economic restrictions are lifted.

The total, however, does not include the 450,000 plus workers on the Government’s Wage Subsidy Scheme, who are having their wages subsidised by the State.

The latest figures lay bare the changed employment landscape in the Republic. The jobless rate was less than 5 per cent in February.

Jack Kennedy, an economist with recruitment site Indeed, said the data indicates that the headline unemployment rate has risen further, but the CSO’s estimate of the Covid-19 adjusted unemployment rate is down from that in April.

“Moreover, falling numbers for those receiving the Pandemic Unemployment Payment suggests we may be starting to see a levelling off,” he said.

“What will be crucial to see now is the impact on the unemployment rate as the economy begins to reopen,” Mr Kennedy said.

“With small retailers and some other workplaces due to reopen next week, this new phase will test how successfully businesses can adapt to this new way of working while still turning a profit. Most people are hopeful that they will go back to their previous jobs, but this depends on how quickly businesses ramp up to full capacity,” he said.

Andrew Webb, chief economist at Grant Thornton Ireland, described the scale of the impact on the labour market as “ difficult to comprehend”.

“An unemployment rate of just over 5 per cent mere weeks ago could now be considered as being higher than 26 per cent if all claimants of the Pandemic Unemployment Payment were classified as unemployed,” he said.

“The great fear over the coming weeks, as we hopefully move through the various stages of lifting lockdown, is how many of these ‘temporarily unemployed’ people have a job to return to. There is a growing sense that we are heading for a deep and damaging downturn with a longer climb back to economic strength than originally hoped,” Mr Webb said.