Analysis: How the pandemic is eating into the Government’s finances 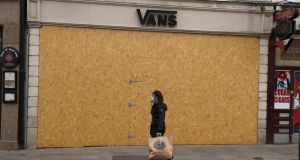 “So far, income tax receipts have also proven more resilient to the broader economic shock”. That was the Department of Finance’s take on the latest exchequer returns, and it was entirely correct.

The figures, published on Wednesday, show income tax, the Government’s largest tax-generating channel, brought in €1.6 billion in May, which was down just 7.8 per cent or €137 million, on the same month last year. That’s astonishing in the context of the biggest jump in unemployment ever recorded.

The State’s jobless rate was clocked at a record 28 per cent in April and 26 per cent in May as opposed to 5.2 per cent in May 2019. So why hasn’t there been a bigger hit to income tax receipts? The answer is two-fold.

First, the near 500,000 employees on the Government’s Temporary Wage Subsidy Scheme (TWSS) are still paying tax even if their wages are being subsidised by the State. Second, the bulk of the workers that have been made redundant are in the low-paying sectors such as retail and hospitality and, by definition, they pay less tax. Hence the impact on income tax has been modest given the broader economic picture.

That’s not to say things won’t change. When the Government strips away its income support programmes, as it surely must and as has been signalled, income tax receipts are likely to decline at a steeper rate particularly as many of the workers on the wage subsidy scheme are unfortunately likely to find themselves out of a job once the economy restarts. Being out of a job not only means you pay less tax, but also leads to you requiring more state supports. That’s a double negative for the exchequer.

One area of the public finances where the impact of the pandemic is playing out is VAT. The sales tax is effectively a tax on consumption, which has been severely curtailed by the lockdown. The figures show VAT receipts for the first five months of the year were down by nearly €1.6 billion, or 22 per cent, and were down by 35 per cent, or €820 million, in the month of May alone. With the vast majority of shops still closed, this was to be expected.

While the unwinding of the lockdown should in theory reverse this trend, it’s difficult to gauge how quickly consumer spending will recover. People may remain wary about going out while the contagion lingers in the community or may find themselves constrained in their spending because of their changed employment status. On the upside, they won’t be as indebted as they were after the financial crisis.

The one bright point in the latest figures was corporation tax, which generated €3.5 billion for the five-month period, 37.5 per cent more than expected. The €3.5 billion was also up nearly 92 per cent on last year, which was a record year for business tax receipts.

May is typically one of the most important months for the business tax and the outperformance was linked to large payments from a small number of companies. Minister for Finance Paschal Donohoe warned the payment related to activity last year and therefore hadn’t been affected by the pandemic.

“I have said many times before, receipts of this order will not last forever. Even if receipts prove resilient during the current crisis, they will decline in the near future,” he warned. That said, corporation tax really is the gift that keeps on giving.

The damage from Covid-19 is, however, pretty evident on the spending side of the ledger. The figures show the Government’s budget deficit – the difference between what the Government spends and what it collects in tax – jumped to €6.1 billion in May, up from just €63 million a year ago.

Before the pandemic hit, the Government had been aiming to run a budget surplus of €2.2 billion.

The changed budgetary landscape has been driven in the main by a massive uptick in spending on health and income supports for workers affected by restrictions to contain the virus.

Spending by the Department of Employment Affairs and Social Protection, which operates the Government’s two pandemic unemployment assistance programmes, was 67 per cent more than expected at €7.4 billion, while health spending was nearly €8 billion, 15 per cent above profile.

Combined spending on the Covid-19 pandemic unemployment payment and the wage subsidy scheme is expected to be close to €5 billion by the middle of June, when the schemes are due to end.

But Donohoe indicated again yesterday that both programmes would be maintained, albeit with changes, for an unspecified period. And the final cost is yet to be determined.