Why are markets booming when a crash is on the way?

Why are markets booming as economies head for biggest crash in decades? 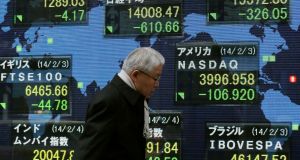 March 17th, 2008, is an infamous day in Irish financial history. It was the moment international markets zeroed in on our banks and their toxic exposure to crashing property values. The first tremor of the financial earthquake to come. Shares in Anglo Irish Bank plunged 20 per cent in what later became known as the “St Patrick’s Day massacre”.

The bank, the financial regulator and the government insisted at the time that the bank was financially sound. And, perhaps even more ludicrous, that it was the hapless victim of rumour-mongering by London hedge funds. This was patently nonsense.

Anglo was a busted flush and the markets knew it. And so began a sequence of moves against the sovereign and its banks that would place the country at the centre of a global financial crisis. In the end, almost every utterance from officialdom here could be dismissed as dangerously deluded or would unravel in the face of fresh disclosures. The markets had the measure of Ireland’s vulnerability, while the authorities and the public were left playing catch up.

Contrast that period with the situation now. Governments, central banks, economists, regulators, many of those who were in denial last time, are predicting the worst slump in 100 years due to Covid-19 – on a par with the Great Depression of the 1930s. Unemployment has catapulted to record highs in most countries and the outlook for business is increasingly uncertain with the virus still rampant in the Americas, fears of a second wave and no sign of a vaccine.

Yet stock markets are booming. After the initial plunge in March, indices are back to near all-time highs with company valuations more comparable to the 2000 dot-com bubble than 1929.

This while the US economy slipped into recession and more than 40 million workers filed for unemployment benefits. Even now as individual US states reopen with cases of the virus still rising, Wall Street pushes higher.

Europe is no different. European indices outperformed their US counterparts in June. The pan-European Stoxx 600 index is now just 15 per cent off its record high.

It said a second wave of the virus, the reintroduction of lockdowns and/or increasing trade tensions globally could trigger a major “correction in asset prices”.

So what’s driving this market exuberance? One obvious answer is central banks. They’ve taken a fire hose to the coronavirus-triggered downturn, pumping trillions of cash into the system via quantitative-easing (QE) programmes.

The European Central Bank increased its pandemic stimulus programme to €1.35 trillion earlier this month – having already spent €2.6 trillion on the last crisis – while the US Federal Reserve has deployed a $3 trillion coronavirus stimulus package – twice the expansion that took place at the height of the 2008 financial crisis.

“This is the mother of all liquidity-induced equity market rallies. Nothing in financial history compares. This is not about vaccine hopes, not about the economy reopening, and certainly not about the deep economic contraction coming to an end,” David Rosenberg, president and chief economist of Rosenberg Research, said.

But whether all this increased liquidity will actually power economic demand is open to question. We’ve been on this great monetary policy experiment – massive QE programmes combined with zero interest rates – since the 2008 financial crisis and global growth has been sluggish at best.

Japan first pushed rates to zero in 1999, and things are little changed now. There are corrosive aspects to keeping interest rates low and pumping money into debt markets indefinitely, potentially ones we haven’t experienced yet. But central banks seem trapped in the policy. Attempts to wean markets off stimulus in the US and Europe have so far come unstuck or been overtaken by new crises.

Having so much money sloshing around the system means investors are no longer differentiating between good and bad borrowers.

Another feature of the current market dynamic is index buying or passive investing, whereby investors or funds buy indices rather than individual stocks to better spread risk and/or capture market trends. This may be over-egging or even distorting the current cycle. The FAANG stocks – Facebook, Apple, Amazon, Netflix, and Google – are seemingly sucking in a level of investment that bears little relation to their inherent value or projected future earnings, traditionally the metrics investors look at, largely because they dominate their respective indices.

These five tech stocks account for 18 per cent of the S&P 500’s value, a combined weighting not seen since the tech bubble, and perhaps another sign that a major correction is on the horizon.

Perceived as beneficiaries of the shutdown, these stocks have spearheaded the rise in markets globally. But it’s noticeable that the more cyclical stocks, particularly banks, the ones that should be climbing if markets truly believe in a V-shaped recovery, are not thriving. Bank of Ireland and AIB, which face the double whammy of Brexit, along with their euro-zone counterparts remain way below their pre-Covid level. Of course, both are facing another loan arrears crisis, once the six-month payment breaks end.

With governments running massive deficits and taking on more debt there may come a point when investors/markets wonder how sensible it is to lend to these sovereigns at such low rates, especially if economic growth remain sluggish. This could result in another debt crisis with heavily indebted countries such as Ireland and Italy firmly in the crosshairs.