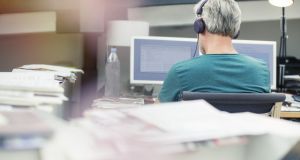 Services activity fell at the second fastest rate since the survey first began in May 2000, although the rate of decline eased notably compared to the record collapse in April.

The outlook for activity over the next 12 months is still negative, though less so than it was in March and April.

The business activity index rose to 23.4 in May, from April’s record low of 13.9. Though the month-on-month increase was a series record, the index was still the second lowest ever recorded, and signalled a further severe drop in service sector activity midway through the second quarter.

Some 61 per cent of survey respondents reported lower activity during the month, compared with 78 per cent in April. Transport, tourism and leisure registered the fastest decline, with technology, media and telecoms the slowest.

Almost two-thirds of companies reported weaker demand, down from 79 per cent in April. There were wide reports of a lack of new work from “hesitant” clients as demand continued to dry up due to the pandemic.

Irish service sector employment fell markedly for the third consecutive month as firms continued to adjust their workforces in light of temporary shutdowns and very little new business. The rate of job shedding eased only slightly from April’s record, and was the fourth fastest in the 20-year survey history.

With many businesses still not fully or even partially open and demand still plummeting, the 12-month outlook for activity remained “very weak” in May, with a greater proportion of companies expecting activity to fall by May 2021 than increase.

The overall degree of pessimism, however, was softer than it had been in both March and April.