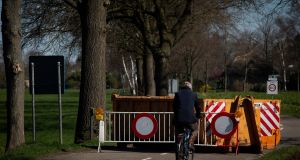 A police blockade made with containers on a border crossing between Belgium and the Netherlands after Belgium closed its borders due to Covid-19 on March 22nd. Photograph: Kristof Van Accom/Belga/AFP via Getty Images

In a bizarre sign of the times, a village shop straddling the Dutch-Belgian border has been split in two by coronavirus – with police tape dividing the interior where the Belgian side is closed and the Dutch side remains open.

The shop is part of the Zeeman chain, which sells household goods and hardware, located in the village of Baarle-Nassau in the southern province of Noord-Brabant, which has the highest concentration of the virus in the Netherlands, with more than 17,000 confirmed cases.

It has one door opening on to a street in Belgium, where all non-essential shops have been ordered to close – and another opening on to the Netherlands, where schools, restaurants and bars are closed but many retailers are still trading.

Because Zeeman is a Dutch chain, the shop in Baarle-Nassau is actually regulated by Dutch law.

However, a spokesperson said the Belgian side had been closed “to show solidarity with our Belgian neighbours and to comply with their regulations”.

As a result, the interior had to be divided as well, though “most of the essential household items, including cleaning products, are here in the Netherlands.

“It’s not ideal, but I suppose you could see it as a creative solution in a crazy situation,” the spokesperson said.

One regular customer who tried to buy two shirts was told they were “off-limits on the Belgian side” and that he couldn’t cross the police tape to get them – although he could almost stretch out and reach them.

“My first inclination was to have a good laugh,” he said. “But I realise this is a very serious situation everywhere now and it shows how strict the authorities believe the rules have to be.”

The area around Baarle-Nassau has a notoriously complicated border dating back to medieval times and is often marked on the streets with iron pins.

Because of its high concentration of Covid-19, Noord-Brabant was also the first Dutch region to show that many of those with symptoms of a regular cold actually had the virus – and that this was the case much more often than previously assumed, allowing a silent spread across the border.

The Dutch government says it’s now likely that schools will remain closed beyond the original provisional date of April 6th, the start of the Easter holidays in both Belgium and the Netherlands.