Economists expect a significant bounce in activity when restrictions are lifted 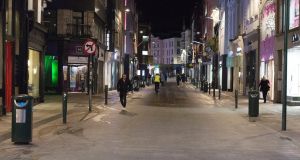 The Government is finalising its package to support employees and businesses through the coronavirus crisis against a backdrop of increased fears about the short-term international economic impact.

A wave of new restrictions across many countries has led major investment banks to push up their predictions about the likely fall in economic activity in the first half of 2020 – with uncertainty about the second half of the year.

Forecasters expect a significant bounce in economic activity when restrictions are lifted – and many businesses restart – but the timing and pace of this is unpredictable. In the meantime uncertainty faces businesses and is also frightening investors – despite massive intervention by the US Federal Reserve on Monday, markets remain in upheaval.

In Ireland, the goal of the Government programme will be to keep as many people connected to their employer as possible by paying some form of wage subsidy for a period of time, though the details of this are not yet fully clear.

The Government is expected to consider its package at a Cabinet meeting on Tuesday, including key issues about the form of the payment, who qualifies, what limits are set and how long the programme continues for, or whether an option is left to extend after an initial period.

Whether the business would be expected to contribute – and what would happen if it could not – is another key issue. The Government is also under pressure to increase credit supports to businesses beyond those already signalled. These moves will push the exchequer well into deficit this year.

“It is vital that the Government does everything it can to keep businesses going and support the income of employees,” said Edgar Morgenroth, economics professor at DCU.

The cost would be significant but the Government has no option and “we will just have to figure out how to pay it later”. The nature of the economic crisis meant it was essential to maintain as many businesses as possible and allow them to be ready to reopen when the restrictions had passed, he said. A lot of this is about maintaining the link between the employer and the employee – keep people in jobs where at all possible. This would mean that at least some of the losses during the crisis could be recouped and the long-term damaged reduced.

“Our preliminary estimates show that much if not all, of the island of Ireland’s hard-fought job gains over the last five years could potentially be lost in the three months from the start of March,” said Neil Gibson, chief economist at EY Ireland.

“The critical question is will they be temporary or permanent losses?” Much would depend on how long restrictions lasted, he said.

A scheme introduced in Denmark gives a government payment of up to 75 per cent of wages for companies in danger of losing one-third or more of their employees, or more than 50 people.

The scheme is due to run until June 9th. The Irish Government introduced an emergency pandemic scheme last week but has now accepted it needs to do more.

The package is being finalised against the backdrop of weekend moves by big US investment banks to slash their forecasts for the US economy, with several of them now expecting a contraction of 25 to 30 per cent in the second quarter, compared with the same period last year.

This extraordinary contraction is due to mucheconomic activity being stopped or hugely constrained as parts of the country are put on “lockdown” and restrictions are put in place in others.

These forecasts have led to further falls in stock markets on Monday, with major intervention by the US Federal Reserve Board to try to calm financial markets.