Westminster chaos, an executive exit at Boeing and a McDonald’s earnings miss 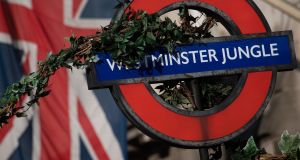 Everything is vine: Westminster tube station is rebranded as Westminster Jungle in a newspaper promotion. Photograph: Leon Neal / Getty Images

Image of the week: Signal delays

The problem with this Westminster tube sign, remodelled as Westminster Jungle on Tuesday as part of an advertising campaign for Rupert Murdoch’s News UK titles, is that some people might start thinking of Boris Johnson as some kind of Tarzan figure, when of course the UK prime minister’s personal preference is to be thought of as the Incredible Hulk.

The “jungle” is the next stage in a branding exercise that started out with a politicians-in-the-zoo theme. Does that make newspaper journalists the zookeepers in this analogy?

Either way, the final destination must surely be the Wild West, as various US industry lobby groups prepare to foist their regulatory standards on the UK as part of the trade deal that Brexit Britain will, at some point, desperately need to make with Donald Trump.

$2.11 Smaller-than-expected profit-per-share at McDonald’s in the third quarter, a rare earnings miss for the fast-food chain as it invests in the revamp of tens of thousands of restaurants. “The world is different than it was in 1955,” said chief executive Steve Easterbrook sagely.

5.9 Percentage growth in global sales in the third quarter - McDonald’s might not be the clown-happy beast it once was in the US market, but it is still doing very healthy business, so to speak, around the world.

2 million Number of individual Spicy McNuggets sold by McDonald’s in its Irish restaurants since their launch in August. Not a sniff of them about in 1955.

Getting to know: Kevin McAllister

Kevin McAllister, not to be confused with left-behind movie child Kevin McCallister, is the most senior executive at Boeing to have lost his job as a result of the 737 Max grounding crisis.

The head of the aircraft manufacturer’s commercial airplanes division only joined Boeing shortly before the 737 Max made its debut – its design and certification having mostly been completed under his predecessor’s watch – but he hasn’t done enough following the crashes of two newly built aircraft killing 346 people to keep himself in situ.

The materials engineer must be wishing he had stayed at GE Aviation, his old employer, rather than join Boeing just as the 103-year-old company’s reputation for safety was majorly compromised. Dennis Muilenburg, meanwhile, lost his chairman position earlier this month, but remains Boeing’s chief executive... for now.

Travel guide company Lonely Planet has unveiled its annual attention-seeking list of the “hottest” – as in most fashionable – cities to visit in 2020, and to the delight of Tourism Ireland, there is some Irish interest here.

5. Bonn, Germany. The birthplace of Ludwig van Beethoven will be celebrating the 250th anniversary of his birth next year.

4. Galway, Ireland. No pressure on the organisers of Galway 2020, or what Lonely Planet dubs “a year-long, city-wide, arty party”. No pressure at all.

3. Cairo, Egypt. The odds of running into someone you know in the queues at the Pyramids of Giza are not as high as you might think.